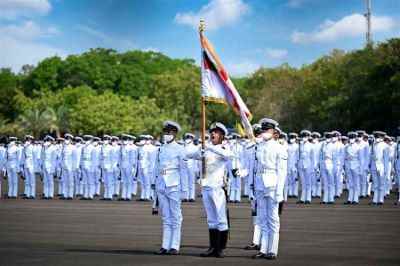 The Indian Navy currently operates more than 180 vessels, including the aircraft carrier INS Viraat, along with operational jet fighters.
Though the primary objective of the navy is to secure national maritime borders, India also uses its navy to enhance its international relations through joint exercises, port visits and humanitarian missions, including disaster relief.
In recent years, the Indian Navy has undergone extensive modernization and expansion with an intention to increase its capabilities as a recognized blue-water navy.

It is fairly advanced in terms of technology and is in control of one of two Asian aircraft carriers. The ships used in Indian Navy are of Indian and foreign origin as well three ballistic missile submarines are also used from 2010.

Even Indian navy is among one of the six navies in the world with nuclear capabilities. Others in the list include US, Russia, China, France and the UK. In addition it is in command of the BrahMos which is the fastest cruise missile in the world with speeds of 2.8 Mach. 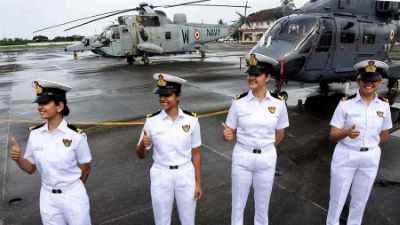 Ranks in Indian Navy:
The Commander of the Navy is the Chief of Naval Staff (CNS), the provision for the rank of Admiral of the Fleet exists, honorary intended for major wartime use and honor. No officer of the Indian Navy has yet been conferred this rank.

The Indian Navy has 3 Commands. Each Command is headed by a Flag Officer Commanding-in-Chief in the rank of Vice Admiral.

The major bases of the Indian Navy are located at Mumbai, Goa, Karwar, Kochi, Chennai, Visakhapatnam, Kolkata and Port Blair. The biggest ships of the Indian Navy form part of its two Fleets. A Fleet is a group of ships that operate under one authority.
The Indian Navy’s Western Fleet is based at Mumbai and the Eastern Fleet is based at Visakhapatnam. There are also Flotillas of ships, Squadrons of submarines and various types of aircraft operated by the Navy from a number of Naval Air Stations.
5787