One of the major concerned areas of Indian economists and sociologists is poverty. Millions of Indians in the present time are entangled in poverty where they are unable to maintain a living standard adequate for a comfortable lifestyle. 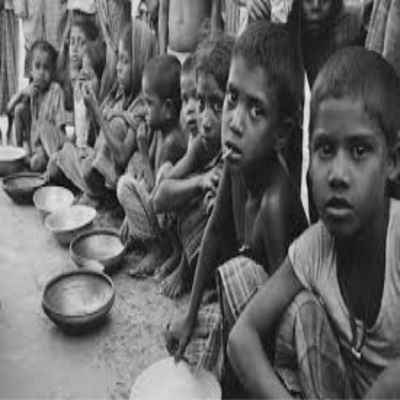 The problem is not new one and has been persisting in the country since independence. India is the only country in the world with highest number of poor people in a single country, about 1/3rd of India’s population live under the poverty line and unable to afford their daily meals.
Based on 2019's PPPs International Comparison Program, According to the United Nations Millennium Development Goals (MDG) programme, 80 million people out of 1.2 billion Indians, roughly equal to 6.7% of India's population, lived below the poverty line of $1.25 in 2018–19.
Nearly 21.1% of the entire rural population and 15% of the urban population of India exists in this difficult physical and financial predicament.

Although India is considered to have progressed in its economic sector yet uneven wealth distribution is observed in the country, with 33% of the total income of the country being earned by the top 10% of income groups.

About 1/4th part of Indian population earn less than $0.40 per day, the poverty threshold limit specified by the Indian government. 75% of total Indian poor peoples reside in rural areas and are dependent on daily wages or are landless laborers and self employed house holders.

Different states of India also show different poverty ratios due to fairly uneven division of resources and wealth. This is reflected by the fact that 40-50% of the populations in Bihar and Orissa live below the poverty line while states such as Delhi and Punjab exhibit very low poverty ratios.

Poverty can be further classified into rural and urban types. Rural poverty is caused due to various factors like dependence of rural population over the agriculture which is highly dependent on rain injustice towards people of lower caste, lack of education, large family size with many mouths to eat and lesser hands to earn and unequal distribution of income.

Main reasons responsible for urban poverty is the scarcity of job opportunities caused due to migration of rural families to cities and lack of proper housing facilities.

The burning issue of poverty has always been the concerned point for Indian government and is continuously planning different programs and schemes for its complete eradication from the country. Indian government has implemented many programs to wipe out poverty since 1970, and has got success to certain extent in this direction.

The government changed different industrial policies and employed Public Distribution System in order to increase the GDP. These programs proved useful and effective.

Poverty in India is dropping but it is still a major issue of Indian Economy. As rural populations of India continues to depend on unpredictable agriculture incomes, while urban Indians rely on jobs that are going scarce day by day.
3487