India covers an area of 3.28 million sq kms and is the seventh largest country in the world. It lies between 8º 4' and 37º 6' North Latitude and 68º 7' and 97º 25' East Longitudes.
The Indian peninsula is surrounded by the Bay of Bengal on the east, the Arabian Sea on the west and the Indian Ocean to the south. 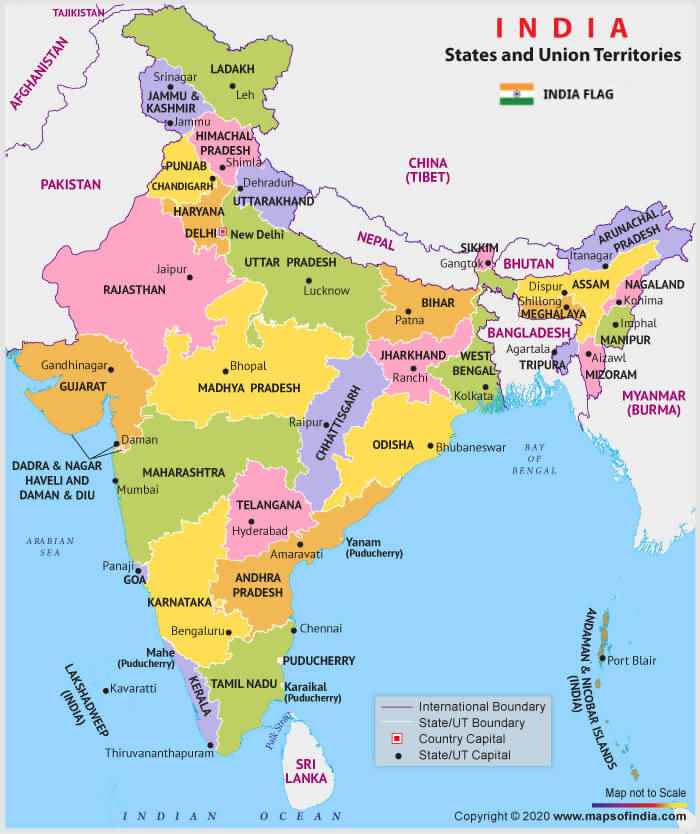 Various landforms like the lofty mountains, the deep valleys, extensive plains and number of islands are found in India. The Himalayas separate India from China and most parts of Asia. The tallest point in India is Kanchenjunga which stands at a height of 8,598 m above sea-level.

Geographically, India can be divided into five physical units - the Great Mountains of the North, the North Indian Plain, the Peninsular Plateau, the Coastal Plains, and the Islands.
The Deccan plateau, the Gangetic plains, the deserts of Rajasthan and the Himalayas in the north form the major terrains of India. Most of the north and north-eastern states come under the Himalayan Range. The rest of northern, central, and eastern India consists of the fertile Indo-Gangetic Plain.
The north-western end of the country is characterized by the Thar Desert while most of southern India are in the Deccan Plateau,. The plateau is separated from the northern plain by the Vindhya Mountains. The Eastern and Western Ghats are coastal mountains on either side of the plateau.

India is bordered by Pakistan on the north-west, Nepal, Bhutan and China on the north-east and Burma and Bangladesh on the east.

The major rivers of India include the Ganges, the Brahmaputra, the Yamuna, the Godavari, the Kaveri, the Narmada, and the Krishna.
92263