Climate defines the Weather conditions of the place observed over a large period of time. It is the geography and geology that strongly affects the climate of a place. Based on various factors like location, surface relief, upper air circulation etc. the climate of any country broadly falls in one out of many climatic Zones.

Climate of India cannot be categorized in one climatic Zone due to its largeness and diversity of geography and geology across different parts of the country. As India lies above equator, most of Southern India falls in temperate climate zone and the Peninsular India witnesses Maritime Climate due to closeness of sea on all three sides.

The climate of India is deeply influenced by the Himalayas and the Thar Desert. Himalayas in the North act as barrier to cold winds from Central Asia keeping Northern India warm and only slightly cool during winters, much warmer as compared to other countries on the same latitude. The Thar Desert plays a significant role in gathering a huge amount of rainfall for the country by absorbing the South West Monsoon winds. 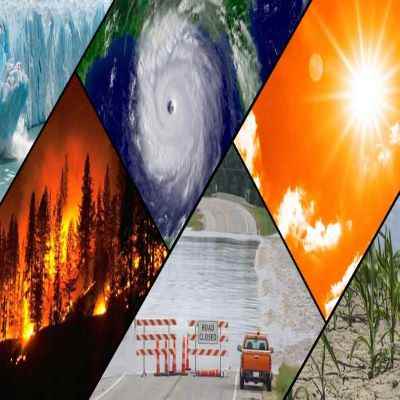 In India, the regions of Western Ghats and Southern parts of Assam have this climate. Although there is a seasonal rainfall experienced here, yet the amount received is heavy (about 200 cm a year).
The heavy rains are received in the months of May to November, which is responsible for the Tropical Wet Forests found here. The Forests and wet climate is associated with a variety of species of animals.

The Peninsular Plateau in India enjoys this climate. Scorching heat is experienced in summers, with the temperature of interior areas going beyond 45°C. The rainy season is experienced in the months of June to September.

The region lying East of Western Ghats and South of Tropic of Cancer witness this climate. Specifically, it includes Karnataka, interior Tamil Nadu, western Andhra Pradesh and central Maharashtra.
The amount of rainfall received in these regions is very less, ranging from 45 to 70 cm, which makes the area Famine Prone. The coldest month in these regions is December which is not very cold.

This climate is a transitional climate falling between tropical desert and humid sub-tropical, with temperatures which are less extreme than the desert climate. The annual rainfall is between 30 to 65 cm but is very unreliable and happens mostly during the summer monsoon season.
Maximum temperatures during summers rise to 40°C. The vegetation mostly comprises short coarse grass. Crops like jowar and bajra are also cultivated.

Most of Northern India experiences the Sub-Tropical Humid type of climate. The regions experience enough monsoon rains with very less winter rains. The summers are really hot and the winters also remain very cold with temperature reaching 0 degrees.
The winter rainfall is a result of Western Disturbance, while the rain in summers is associated with South West Summer Monsoons.
Humid sub-tropical with dry winters

The plain area towards the foothills of Himalaya witnesses this kind of a climate. Rajasthan, Punjab, Haryana, Uttar Pradesh, West Bengal fall under this category.
The rainfall received is less and is also concentrated mostly in summers, but it increases as one move towards Himalayas. While the summers experience scorching heat, winters are dry with feeble winds.

The Mountain or alpine climate is witnesses throughout Himalayas. In the Himalayas the temperature falls by 0.6 degrees with the rise of every 100 m in altitude. This sudden and steep variation in climate gives rise to a variety of climates from nearly tropical in the foothills to tundra type above the snow line.
The Trans Himalayan Belt (northern side of the western Himalayas) is wind blown wastelands with extremely arid climate. The Southern sides of the mountains are protected from the cold winds rising from Central Asia.
Due to severely cold winters and scanty rainfall the vegetative growth is really less. The snowfall is received mostly in the months of November-December.
10648