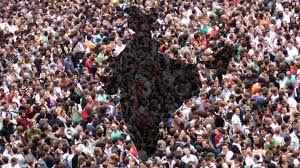 When the number of organisms exceeds beyond the carrying capacity of its habitat the condition is termed as overpopulation.
The same condition arises in the relationship between the human population and its environment, the Earth. The condition can be seen as if a given environment has a food or drinking water enough for only 9 but anyhow the population increases beyond that then that system is termed overpopulated.

India was the first country in the world to have a population policy. In a country like India, over population hampers the development of the country and it’s society.
The developing countries are already short of resources and with the rapidly increasing population due to shortage of the available resources lead to an increase in poverty, malnutrition, and many other problems.

According to Webster’s dictionary the word “Population explosion” literally means “a pyramiding of numbers of a biological population”.

The main factors affecting the increase in population are:
India, has had to face several economic and political challenges due to population explosion. The population density of India in 1996 was about 287 persons per sq. Km which has increased to 324 persons per sq. Km in 2001.
Government took numerous measures to control growing population. Government is spending thousands of rupees on its Family Planning programmes which insist on having only two-child family, to maintain a balance between the population size and resources, to make young people responsible towards sexuality, and to provide education and services to all. 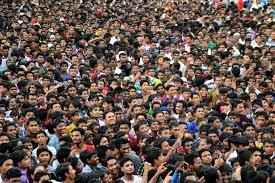 Methods that are employed currently for family planning are vasectomy, tubectomy, Intra Uterine Devices, condoms, diaphragms, jelly/cream tubes, and oral pills. Although the rate of increase in population has decreased, yet it needs to be controlled further.

The population in India continues to increase at the rate of 1.58%. The effects of this enormous increase in population are evident in the increasing poverty, unemployment, air and water pollution, and shortage of food, health resources and educational resources.
9176