The Himalayan Mountain Range or Himalayas literally means “Abode of Snow”. It is the youngest Mountain range with a cluster of Sedimentary and Metamorphic Rocks. The origin of Himalayas is traced back to the Tectonic Plate collisions.
About 50-55 Million years back, when the Indian Plate collided with the Eurasian Plate to join the Asian Continent the impact Plate collision led to the formation of Himalayas and Tibetan Plateau.

This is the reason behind Himalayas being called as “Fold Mountains”.  It is considered to be the world’s highest mountain Range, with its highest peak being “Mount Everest”, which lies along Nepal-China Border. The highest Peak of Himalyan Range in India is the Kanchenjunga. 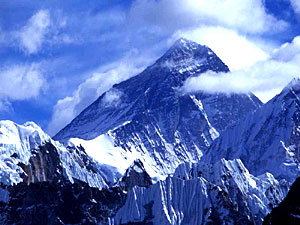 The Himalayas separate Indian Sub-continent and the Tibetan Plateau. To the glory of Himalayas, it contains two of the World’s highest peaks, K2 and Mount Everest, which are called Eight Thousanders as they cross the mark of 8000 meters.

If we consider the entire Himalayan system which includes a number of smaller outlying ranges, than the system covers six countries, namely India, Tibet, Nepal, Bhutan, Afghanistan, Pakistan.
Many mountains in the Himalayan Range carry a religious significance for both Hindus and Buddhists. Major rivers like Ganga, Brahmaputra, Indus, Yangtse originate from this range and the ultimate basin called the Alluvial Plain formed by them pave home for about 1.4 billion people.

The Himalayan Range is extremely huge in itself with a diverse variety of Flora and Fauna. The Kind of flora and fauna varies with the Soil, Climate, rainfall, Altitude.
Above the Alluvial Plain in the Indo-Gangetic Basin, there is the Tarai belt which comprises of Marshy Medows, as it receives higher rainfall and is the house to Indian Rhinoceros. Above the Tarai belt is the Bhabar zone of Rocky soils, with forests dominated by Chir Pine and Sal trees.
10714