The Vindhya Range geographically separates the Northern India from the Southern India as it runs across the Central India. The origin of Vindhya Range is believed to be from the wastes produced due to the weathering of Aravalli Range. 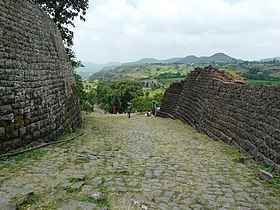 The Range extends from Gujarat in the West (almost along its border with Rajasthan and Madhya Pradesh) moving eastwards towards the Ganges in Mirzapur.
The area of North and South portions of the mountain is arid and inhospitable. The region covers the following states Madhya Pradesh, Chhattisgarh, Gujarat, Southern parts of Uttar Pradesh and Bihar

The southern slopes of the range are drained by the Narmada River, which then moves westwards towards the Arabian Sea. Apart from Narmada, Ganges also drains many parts of the Range. The famous Ranthambore National park is also formed amidst this range of mountains. The range has always been known for its great reserves of wildlife.
The Mountain Range which divides the North and South India is Vindhyas. The Vindhya Range is a complex, discontinuous chain of mountain ridges, hill ranges, highlands and plateau escarpments in west-central India. They divide North and South India. 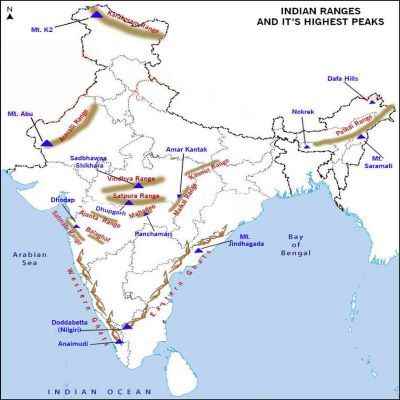 The Dhupgarh Peak (4,429 feet [1,350 metres]), near Pachmarhi in south-central Madhya Pradesh, is the state's highest point. Northwest of the Vindhya Range is the Malwa Plateau (1,650 to 2,000 feet [500 to 600 metres]). Today, the definition of the Vindhyas is primarily restricted to the Central Indian escarpments, hills and highlands located to the north of the Narmada River.
In India specifically the mountain ranges Satpura and Vindhya found in the central- western part of the Indian sub continent are block mountains, having formed through cracks in the earth's crust, these ranges rose while the block of earth known as the Rift Valley depressed.
Several tributaries of the Ganga-Yamuna system originate from the Vindhyas. These include Chambal, Betwa, Dhasan, Ken, Tamsa, Kali Sindh and Parbati. The northern slopes of the Vindhyas are drained by these rivers. Narmada and Son rivers drain the southern slopes of the Vindhyas.
2055