India is the land of diversity in all aspects - cultural, social, biotic and geographical. No matter, how creative the human mind be, it cannot pastiche His eternal art that is bewitching and beautifully perplexing. Known for national integration, the sub-continent also presents a perfect natural integration that encompasses sublime highlands, whispering air, grooving grasslands, networking tributaries, carefree beach-waves, mighty glaciers, sultry desert, and all that makes this mighty pot-pourri, truly special. 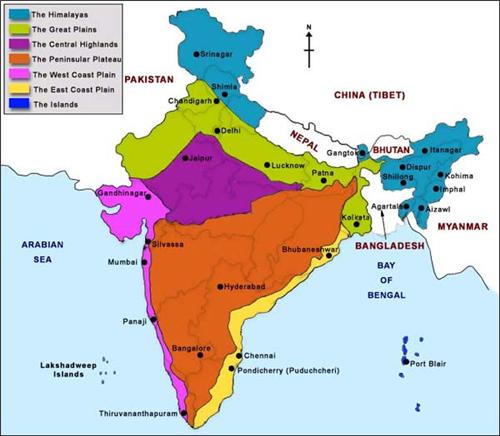 Considering all its features, the sub-continent is classified into the following regions:

The northern boundary of India is created by the northern mountain ranges known as Himalayas that form the natural border between India and Tibet. The Himalayan range is divided into Pir Panjal Range, Zanskar Range, Ladakh Range, Dhaula Dhar Range and East Karakoram Range. Apart from the Himalayan, other ranges are Siwalik Range lying in the outer Himalayas, Karakom Range, Patkai Range lying at the eastern part of India at the Burma border, Vindhya Range covering parts of central India, Satpura Range covering parts of central India being parallel to Vindhya Range, Aravalli Range covering areas of Haryana and Rajasthan states, the Western Ghats and the Eastern Ghats.
Read more about Northern Mountains

The plains named after the rivers flowing through them - Indus and Ganges, cover northern and eastern parts of India, stretching to cover some parts of Pakistan, Nepal and Bangladesh also. These rivers form tributaries that network the entire region. These tributaries are Yamuna, Chambal, Gomti, Sutlej, Kosi, Ravi, Beas, Chenab, Ghaghara and Tista. These rivers make the soil fertile and apt for farming which is widely practiced all over. This has led to tremendous increase in population with time. The plains are divided into four belts namely, the Bhabar belt, the Terai belt, the Bangar belt and the Khadar belt. The crops produced in these belts are wheat, rice, cotton, sugarcane, and maize.
Read more about Indo-Gangetic Plains

It is ranked as the seventh biggest desert in the world that covers most of the Rajasthan and neighboring states of Haryana, Punjab and Gujarat. It also crosses the borders to touch Pakistan where it is known as Cholistan desert. Its some parts are attributed by sand dunes and some have rocks. The area receives very little rainfall and just one river that flows through it is known as Luni. The vegetation in the area includes small trees, herb and shrubs. The sandy nature of the soil makes it get eroded quite often, due to speedy winds that blow with full force in the region. Understanding the need of plantation in the region to avoid erosion, the Indira Gandhi Canal scheme was started in 1965 to irrigate the land. The common source of income for the people here is animal husbandry and agroforestry.
Read more about the Thar Desert

The highlands of central India are divided into three plateaus, the Deccan Plateau located between the western and eastern ghats, the Malwa Plateau at the western parts of India including states like Rajasthan, Gujarat and Madhya Pradesh, and the Chota Nagpur Plateau covering eastern states of India like Bihar, Jharkhand, Chattisgarh and Odisha. The Chota Nagour Plateau is rich in coal and metal ores and is divided into Ranchi plateau, Hazaribagh plateau and Koderma plateau. The Ranchi plateau is characterized by numerous falls. The Hazaribagh plateau is a part of Hazaribagh region, the lower part of which is known as Koderma plateau.
Read more about the Central Highlands

The Eastern and Western Coastal Plains

These plains lie at the eastern parts of India spreading from the state Tamil Nadu to West Bengal. With rivers like Mahanadi, Kaveri , Krishna and Godavari flowing through them, Chilika Lake runs alongside them. The plains are divided into six regions – Coromandel Coast of Tamil Nadu, Kanyakumari Coast at the southern-tip of India, Krishna-Godavari delta at southeast of Vijaywada, Mahanadi delta in Odisha, and the south Andhra Pradesh coastal plain that covers the major parts of Eastern Ghat and Bay of Bengal. These coastal regions normally stay humid with frequent rainfall. Tall coconut palms adorn the eastern coastline, apart from the crops grown here. Fishing is the major occupation of the locals here.

As the name suggests, they lie at the areas of Western Ghats forming the coastal parts of that are flanked by the Arabian Sea. They cover Gujarat, Maharashtra, Goa, Karnataka and Kerala. Narmada, Zuari, Tapi and Mandovi are rivers that flux through them. The plains are divided into Konkan and Malabar Coasts. The Konkan coast runs through 700 kms, covering parts of the Karnataka, Goa and Maharashtra. The Malabar coast covers 845 kms, stretching from Karnataka to the extreme south tip Kanyakumari through Kerala. All of the Malabar coast receives heavy rainfall that makes it suitably irrigated enough for farming.
Read more about western and eastern coastal plains

There are two main groups of islands – Andaman and Nicobar islands and Lakshadweep islands that are recognized as Union Territories (UT). Apart from them, Daman and Diu are also known as UT; they almost touch the mainland unlike Andaman and Nicobar and Lakshadweep. Andaman islands are composed of 572 tiny islands that serve as a great tourist attraction. The Nicobar islands are not accessible for the tourists. Inhabited by native tribes, their beaches stay deserted yet beautiful owing to lovely colors added to the waters by a variety of corals. The Lakshadweep islands comprise of 35 tiny islands that stand in the Laccadive Sea, just 200 to 400 kms from Kerala, the southwestern coast of India.

All these natural wonders make India, the most gifted land on Earth. The inquisitive nature of man led to him to explore all these physiographic features of the sub-continent, understanding and praising their explicit beauty.
Read more about Islands of India
84333