The Great Plains cover a large area of 700,000 km square in northern and eastern India and some parts of Pakistan, Nepal and Bangladesh. Named after the rivers Indus and Ganges that flow through them, they comprise of alluvial soil.
The rivers - Ganga, Indus and Brahmaputra, flow from Jammu and Kashmir to Assam along with tributaries, Yamuna, Gomti, Chambal, Ghaghara, Sutlej, Kosi, Beas, Ravi, Teesta and Chenab.
The plains serve as very useful land for farming as they are very fertile and so stay highly populated as the cities like Jammu, Amritsar, Bhathinda, Ludhiana, Chandigarh, Kanpur, Lucknow, Varanasi, Allahabad, Kolkata, Patna, some parts of Pakistan and Bangladesh. 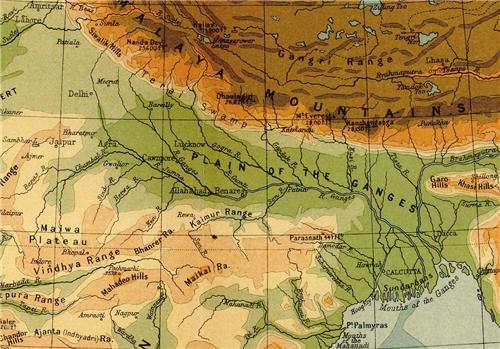 The Indo-Gangetic Plains are divided into four belts:

The Bhabar Belt – The 6 to 15 kms narrow belt lies on Himalayan foothills, below Siwalik hills and comprises of rocks and pebbles that are brought about by the streams.
The streams flow under them. The belt that got its name from long grass – Eulaliopsis binata growing here, covers the entire of the state Uttarakhand. Being very fertile, the area serves as a base for farming as well as trade and commerce.

The Terai Belt – The belt runs alongside the Bhabar belt at its south in the outer Himalayas and Siwalik Hills. It covers the northern region of Indo-Gangetic plains like Himachal Pradesh, Haryana, Uttrakhand, Uttar Pradesh and Bihar.
It is made up of loose soil through which the streams flowing underneath often reappear. The area receives lots of rainfall and nestle in it a huge variety of wildlife. The belt comprises of savanna lands, forests and marsh grasslands. The rivers like Yamuna, Ganges, Narayani, Kosi, Sarda emerging from Himalayas, pass through this region.
The alluvium deposits contain clay, sand, silt and gravel which is brought here by streams, every year. Through the Terai region, a huge number of seasonal rivers also flow. The belt is inhabited by some ethnic groups including the Tharu community.

The Bangar Belt – ‘Bangar’ is one of the terms that differentiate between river plains and alluvial soils, with another being ‘Khadir’. The belt lies in northern India and Pakistan. Bangar comprises of old alluvium and forms the low upland in Gangetic plains that is covered by laterite soil.
It does not get floods and is quite fertile. While Khadir area comprises of new alluvial soil which is quite fertile for farming.

The Khadar Belt – Also known as Khadir, this belt comprises of newest alluvium that is transported here by the rivers. The belt lies at the lower side of Bangar belt.

The Indo-Gangetic plains, which are very densely populated, are most suitable for irrigation through canals and farming. The rivers that flow through them make them most fertile and the most widely farmed area in the world with the production of major crops like wheat, rice, sugarcane, cotton and maize.
13873