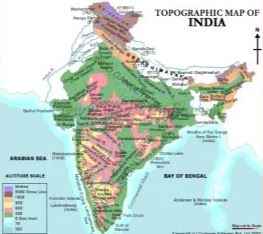 The life is very much dependent on water. Our agricultural, municipal, industrial, environmental and aesthetic well being depends on water. A watershed or basin of a river is a landform with highpoints that are connected by ridgelines that descend into lower elevations and stream valleys.

A watershed carries water after rainfall or melting of snow from the land which gets accumulated into soils, as groundwaters, in creeks, and streams, which later forms larger rivers and eventually the sea. The word “Water-shed” is used only for basin of a river of an area of 2000sq. Km.

There are mainly three water-sheds in India;
All the major rivers of India originate in one or the other of these watersheds.

The Himalaya and the Karakoram ranges

The Himalayan range is covered with snow hence rivers arising from the Himalayas are snow-fed and flows continously throughout the year. The flow of networks of rivers is dependant on the monsoons and shrinks into streams during the dry season.

The river Ganga originates from the Gangotri Glacier in Uttaranchal and flows in south east to Bangladesh.  Western Himalayas is the home of Yamuna and Gomti rivers and merge with the Ganges in the plains. A tributary of Ganges, Brahmaputra, originates in Tibet and enters India in Arunachal Pradesh from the east proceeding towards west and meets Ganges in Bangladesh.

The Vindhya Range in central India divides The Indian subcontinent into northern India i.e., the Indo-Gangetic plain and Southern India.

Another tributary of the Ganga, Chambal, springs up from the Vindhya-Satpura watershed and flows towards east. Tapti river from this watershed also flows towards west drains into the Arabian Sea in Gujarat. Ten percent of total outflow is contributed by rivers flowing from east towards west.

The Western Ghats or Sahyadri Mountains, is a mountain range in western India. It runs from north towards western edge of the Deccan Plateau in the south, and separates the plateau from a narrow coastal plain along the Arabian Sea. Western Ghats starts from the Gujarat-Maharashtra border. About sixty percent of the Western Ghats are located in the state of Karnataka.

The Western Ghats are the source of all Deccan rivers. Major rivers originated from the Deccan are Mahanadi, Godavari, Krishna, and Kaveri River, these all fall into the Bay of Bengal. Twenty percent of total outflow in India is contributed by rivers flowing from this watershed.
13936