India derived its name from 'Bharat' who was a legendary and mythological ruler according to Hindu scriptures. Archaeological excavations and historical sites in Bhimbetka in Madhya Pradesh, Kurnool in Andhra Pradesh, Chotanagpur Plateau in central India and Belan in Uttar Pradesh among others have discovered stone and metal tools to suggest early human settlement in India during the prehistoric times.

The prehistoric period in India which was followed by the ancient period marks the beginning of the first urban civilisation of India – the Indus Valley Civilisation which dates to 5000 BC and was concentrated along Mohenjodaro and Harappa located in Sindh and Punjab respectively in modern day Pakistan. After the decline of the Indus Valley civilisation because of flooding and climate change, the Aryan influence gained momentum and the Vedic period started in India. The Vedic period saw the rise of Hinduism and with it the caste system which plagued India for a long time. This period also saw the rise of several other empires like the Gupta empire and the Mauryan empire which established its military might across India.

Medieval India started with the rise of the Islamic empires including the Delhi Sultanate and the Mughal Era. The Mughals have left an indelible mark on Indian history through their art and architecture and several historical monuments like the Taj Mahal and the Red Fort. The Mughals were one of the first rulers who tried to bring the whole of India under one rule. With the fall of Mughal Empire and the defeat of Bahadur Shah Zafar, the British firmly established their grip over India defeating other colonial powers. The British rule which began with the coming of the East India Company lasted for over two centuries in India. The anti-British movement gained momentum form the early 20th century with the establishment of the Nationalist Movement in India led by Mahatma Gandhi. India wrested its independence from the British in 1947 after years of protests and mass agitation which also saw the partition of India and birth of Pakistan.

India is a land of cultural diversities and is influenced by various religions, art and architecture. India has successfully embraced the teachings of the Vedas, preaching of Lord Buddha as illustrated in Thripitaka, and that of Kalpa Sutra of the Jains and Adi Granth of the Sikhs. However, influence of Mauryan and Guptas is evident from the paintings in Ajanta and Ellora, and Sanchi Stupa. Several small south Indian kingdoms like the Cholas, the Chalukyas and Rashtrakutas have influenced the temple architecture. Temples which are built even today reflect Dravidian influence.  History of Indian dance and music can be traced to Kalidasa’s play Shakuntala and Meghdoot and hymns sung during Vedic sacrifices. Indian martial arts Kalarippayattu from Kerala is also influenced by ancient fighting style of 12th century BC and is practised even today. Indian cuisine is also influenced by religion which is mostly Hinduism. Cow is worshipped by all Hindus and most of the Indians are vegetarians. However, with the advent of Muslim rule in India, dishes like biriyani, kebabs and use of dry fruits in various dishes increased. Influence of European food culture can be witnessed in Goa and Kolkata where the Europeans first settled. In Puducherry, French cuisine is still followed while in Goa, Portuguese food is very popular. 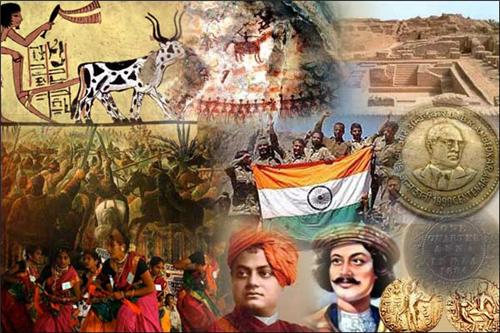 The history of Indian coins can be traced to the Indus Valley Civilization with the first documented coins the ‘Punch marked’ coins issued between 7th-6th century BC and 1st century AD. Initially copper and silver coins were used for trade purposes with various symbols mostly that of animals and plants. The Gupta empire produced a large number of gold coins depicting several rituals. In the later middle ages, Sher Shah introduced a number of silver coins with Islamic motifs. Some coins issued during Akbar and Jahangir also had Islamic calligraphy on it. The current currency was derived from coins introduced by Sher Shah. In 1861 with the Paper Currency Act, the paper rupees were introduced by the Bank of Hindustan and the General Bank of Bengal.
Click here to read more on history of Indian Coins

India has a rich history of social reformers who have played a great role in shaping Indian society and helping it do away with some evils like sati and child marriage that plagued the society for a long time. Many reforms like Arya Samaj, Theosophical Society, Brahmo Samaj, Manav Dharma Sabha, Nirankari Movement and many more worked towards preventing existing religions, moving ahead of any social discrimination. Some of these sects like Brahma Kumaris is still strong in some pockets of the country.
Click here for details on Historical Reforms

Major wars have been fought at various times on Indian soil. India has witnessed the rise and fall of various empires and dynasties through some fierce and bloody battles.  The Kalinga War between Asoka and the state of Kalinga changed Asoka completely and forced him to follow the path of non-violence and took on the onus to spread Buddhism. The three battles of Panipat had their own significance. While the second battle of Panipat marked the beginning of Akbar’s rule in India, the third saw the downfall of the Maratha kingdom. The wars fought in modern times were no less violent with memories of Kargil War still haunting us.

Indian rulers from time to time received many royal titles. These titles made them not only more powerful  but also a princely status. Titles like Maharaja, Raja, Nawab, Wali were very common between Indian rulers. Among the Hindu rulers titles like Rana, Rawat, Sar Desai, and Thakur were used to denote prestigious positions.

Indian history is what it is today because of some of our brave soldiers and heroes who have sacrificed their lives for us over centuries. Not only freedom fighters like Mahatma Gandhi, Tilak, and Netaji are known for their contribution but people like Raja Rammohun Roy, Vivekanada, and B.R Ambedkar have contributed in their own way to free the society from malice and evil.