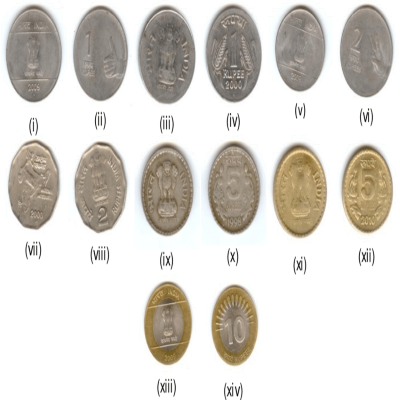 The study of coins also called Numismatics, is interesting since it reveals facts and customs of the period of that coin’s prevalence.
The complexity that Numismatics offers, is evident from the fact that the number of distinct dynasties that existed during that time tried to develop their own style of Coinage.
The study of Kharoshti and Brahmni, which are the ancient texts of India were actually deciphered with the help of coinage of the Kushan Era.
Many factors that help historians to decipher the possible rise and fall of various kingdoms and rulers are the change in design style, dates mentioned and some changes in language
However it is observed that nearly every Ruler tried to have their unique lineage of coins which when deciphered properly, gave umpteen information about the period. Coins help apprehend the socio-political, cultural and administrative aspects of past kingdoms and rulers.

Numismatics also reveals the religious beliefs and sentiments during that time. For Example, it was first in the coins of Kanishka dynasty that Buddha was represented in form while earlier it was demonstrated symbolically. Similarly on the coins of Gupta Empire one can witness forms of Durga, Laxmi and Ganga.

It was with the British taking authority of currency that the first stance of Modern coinage took birth in India. The first coinage under the crown was issued in 1862 and in 1877 Queen Victoria assumed the title of Empress of India. Edward VII ascended after Queen Victoria and the coins issued, bore his model.

Thus the history of Indian Coinage is both exciting yet complicated as it is immensely vast. Over umpteen reigns there has been a great lineage of coinage set by different rulers that throw a light on the customs and traditions of that Era. Thus, Numismatics is extremely important to get details on periodical changes in history.
10266