Let's take you to the tour of Coinage system of Ancient India:

Ancient Indian coins became popular in the Mauryan Dynasty and were described in the famous Arthshastra by Kautilya. As per the Arthshastra, metals were first melted then purified with alkali and beaten into sheets and finally minted into coins after punching with the symbols.

In the earlier periods before Mauryan times several punches were used on the coins but the Mauryans, set the standard of the particular shape and size with fixed number of punch marks.
The coins of the Mauryan Dynasty were round, oval or square with symbols punched on it. Various symbols used were of different floral patterns, with hills, birds, animals, reptiles, human figures where particular symbol represented particular place or area. 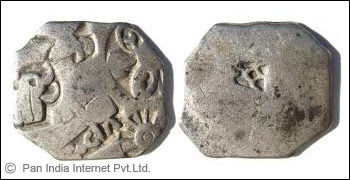 Historical collections of the coins from Mauryan Dynasty also reveal few smaller coins which are assumed to be the cut parts of the full coins. According to historians, these small coins were considered half denominations and were accepted as legal tender.
There were also some minute coins weighing between 2 and 3 grains which were generally used for transactions in the period. These minute coins were referred as ‘mashaka’ which was one sixteenth of the `pana`.

The coins were square or rectangular in shape and were made by either Copper or Silver. The coins have uneven texture and were one and a half inches in length and three fourth inches wide. These coins were punched with five bold symbols on one side and four on the other. 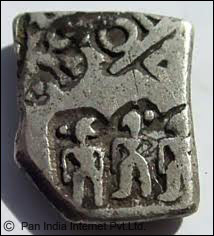 As the successors of Pushyamitra Sunga shifted to Vidisha, the coins sized about an inch and bore four or five symbols on one side of the coin and the other side remained blank and unpunched.
In some of the coins one of the symbols was replaced by a legend of the names of their issuers. Some of copper coin bore only one or two symbols. Inscription was done to know the issuing authority. The later coins used animals in place of punch marked symbols.

The coins of the early tribal republics of the second century B.C bore the names of the tribes and the places on the coins in the Brahmi scripts.
Tribal republic people issued coins mainly in copper, though some issued coins in silver also. The later coins of Surasena rulers bore symbols and a figure of a standing female deity. The coins of Vatsa has a bull with a symbol on one side and a tree in railing with some other symbols on the other, with the name of the king inscribed on it.
Coins in Kushan Dynasty

The Kushana Dynasty came up with the revolution in the coinage of the country as they were the first to introduce gold coins with the images of rulers of then time along with deities.
The emperors of the dynasty believed that they are ruling the subjects because of God’s wishes so started depicting figures of Gods who bestowed them. 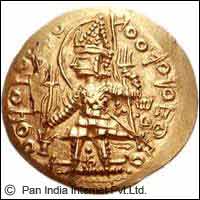 One of the greatest ruler of the dynasty, emperor Kanishka minted coins during his reign which were distinct from the other earlier coins of dynasty in a way that he was the first one to mint the coins with the effigies of Buddha.
Coins of Kanishka got the place among the rare coins of the world as only 5 gold coins exist all over the world with the portrait of Buddha.

The Kushna’s coins became very popular and the trend of showing ruler on front and Hindu deities on reverse was followed for another 6 centuries by later Indian dynasties.

The Gupta Dynasty is considered the golden age in Indian history. First coins of the Gupta Dynasty were minted by Samudragupta who is considered the father of Gupta monetary system.
The first coins minted by him were called Dinara inspired by the Roman coins but later the coins were minted in the Indian style with the weight standard of 9.2 gms of gold and called Suvarna.

The coins issued during the reign of Chola Empire traced their roots back to Hindu Mythology and were a perfect mirror to the socio-cultural aspects of society at that point.
The emblem of Chola, which is defined by a standing tiger with its tail upraised on one side and an elephant on the other side is inscribed on the coins. 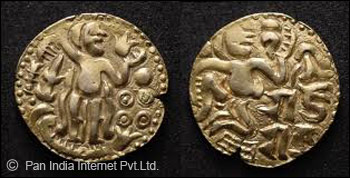 The coins bore an `anushka` like symbol and the legend `Atinan etiran Chandan` meaning Atinan, the son or the successor of Chanda on one side of the coin.
The other side bore the emblem of the Chola. These coins were minted both in India and Sri Lanka.
All metals like gold, Silver and Copper were used as Coin’s fabric. Some coins bore both the standing King and the sitting king on different sides of the coin. It was generally noticed that the coins contained the image of the legends that were highly respected by the kings at that time.

The coins minted by the Kadambas always remained a center of attraction for the scholars of Numismatics. Most of them were made of Gold or Copper.
One characteristic feature of these coins was that the punch used to inscribe images was so deeply done that it almost appeared as a saucer. These coins are fondly remembered as Padmatankas (lotus coins).

he coins of Satavahana Dynasty were built in various shapes, metals and weights. Lead, copper, potin, brass, bronze and silver were all the metals used for these coins.
These coins also dominantly displayed symbols such as the hill, river, tree, Goddess Lakshmi, lion, tiger, elephant, bull, horse, Brahmni and Prakrit were the major scripts used for the coins.
50257