Knowing the history of coins reveals mush about the period during which they were issued. Coins of the medieval period give us wonderful insights about the history of different dynasties. From coins issued in times of Delhi Sultanate to coins of Mughal India, opportunities are galore.
Medieval period coins not only gives us wonderful insights about the history of the time but also about the different types of Calendar Systems that were followed in those days. They differ a lot from the coins of ancient times.
The difference between the coins used in the ancient times versus the medieval times is that the coins of ancient times featured a profile face with a Sanskrit text while medieval period coins showed the full face on the obverse side with khutba inscribed on the reverse side.
Let's take you to the tour of Coinage system of Medieval India:

Slave Dynasty: The Slave Dynasty introduced a new form of monetary System in India that extended till later years. A coin was introduced that weighted 11.6 gms of Silver or Gold. These medieval period coins were termed as Tanka,that represented the weight in Indian native language called Tola.

Mughal empire: Although Mughal empire was established after the defeat of Delhi Sultanate, it was during the reign of Babur that the coin system was actually established. 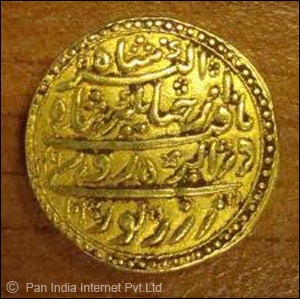 The coins issued under Babur’s rule were called “Shah Rukh”, which were made of 72 grain silver.
One side of the coin contained the name of the king along with his title and date. Initially round in shape they were later converted to square shaped coins.
Apart from Silver, gold and copper coins were also issued.
Many coins of medieval India during his reign bore name of Prince Salim.
The coins issued during this period carried `Kalima` on one side and `Nuruddin Muhammad Jahangir Badshah Ghazi` on the flip side of the coin.
The coinage of Shah Jahan’s reign had the `Kalima` and the mint`s name on one side and his name and title `Sahib-qiran Sani Shihabuddin Muhammad Shah Jahan Badshah Ghazi` on the other. One side of the margin contained the titles while the other side contained the name of Khalifs.

During the reign of Aurengzeb, his name and title `Abu-al-zafar Muiuddin Muhammad Bahadur Shah Alamgir Aurangzeb Badshah Ghazi` was present on obverse side of the coin.
Due to the rise in the metal price at that time, the size of the issued coins was reduced to that of a “Dam”. While during the reign of Akbar and Jehangir, the places issuing the coins were limited, the number was larger in Aurengzeb’s era.

Aluddin Khilji made a major change in the pattern of appearance of the coins, which included dropping Khalifa from the observing side of the coin.
Alauddin Khilji introduced another type of coin where his name and title were divided on the two sides of the coins. 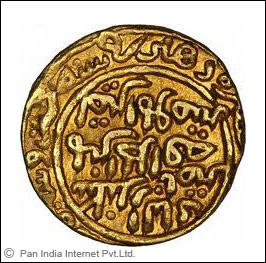 Delhi Sultanate: When Ghoris established their reign  in Lahore, they started the “Bull Hoarsemen” type of coins. The ruler got the picture of Goddess Laxmi inscribed on one side and on the other side imprinted his name.
Some coins were patterned in a way that they bore horseman, and some coins had the bull on the one side and an Arabic inscription on the other side. During this time, he also issued some copper coins. 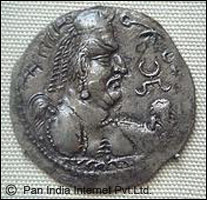 A distinctive feature of the coins of Huna Empire is that they inherited the features of the empire they ruled.
The coins were decorated with the figure of the king bedecked with a head dress, which was adorned with buffalo head and wings on either side.
Coins in Rajput Dynasty The Rajput Dynasty consisted of Kshatriyas, who were the warrior community and descendants of Post Gupta Empire. This community was divided into 2 clans with each clan having their own lineage.
The general pattern of the coin included the name of the Ruler on one side and the picture of Goddess Laxmi on other side.  The text of the coins was written in Devnagiri script. The weight of these gold coins was maintained to be four and half Masha, which is equivalent to 3.6 gms.
Coins of Maratha Rulers

The Marathas were the only powerful Hindu Power that rose after the Mughal Empire’s decline. Shivaji and his successors issued coins in Gold and Copper.
The language used on the coins was Nagari. The coins bore the name Chhatrapati Shivaji on one side and Sri Raja Siva on the other. 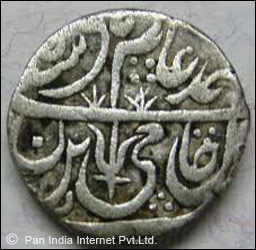 The coinage developed during the Sikh Era almost remained uniform during the entire era. There were about 20 mints that used to produce these coins.
The Punjabi word for coin “Sikka” is supposed to have been borrowed by Persia. The language used on the coins was Persian and they were initially dedicated to the Sikh Gurus. 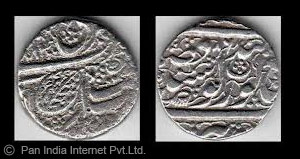 Quotes such as the sword of Nanak is the provider and Guru Govind Singh, the king of kings, is by grace, the lord`, was incised on the obverse of the coin and `Zarb aminuddahar Maswarat-Shahar Zinatultakht Mubarak bakht (coined at the protector, the walled city, the ornament of the blessed throne) was etched on the reverse side of the coin.

The coins produced under the Pandya period were mainly punch-marked Silver and die-struck copper coins. During some later period, gold coins were also produced that bore the image of a fish, sometimes singly, sometimes in pairs along with symbols like a bow, a conch, and a discus. Kannada and Nagari were the main script languages used for these coins.

Besides the fish emblem on copper coins there were Chola Standing and Chalukya devices that were also inscribed on these coins.
Many coins were in square shape and at times attributed to a particular ruler. The coins of the Pandyas, which bore the fish symbols, were termed as `Kodandaraman` and `Kanchi Valangum Perumal`. The Chola standing and the seated king type coins had the titles `Bhutala Ellamthalai`, `Parasurama`, `Kulasekhara`.

The coins of Vijayanagar Empire were extremely popular and even set a prototype of generations of coinage. The general pattern of the coin had the Ruler’s picture on one side and his name on another. The script used by these coins was mainly Devanagiri. 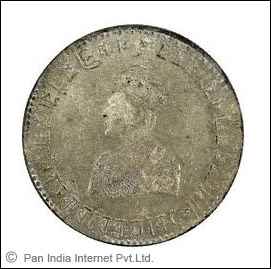 Tripura coins have always excited numismatics as they contained the name of the Queen along with the name of King. These coins built under Ratna Manikya era had fixed dates on them, and were totally based on Hindu religious styles. The language used in these coins was mainly Sanskrit.

The coins introduced during Mukut Manikya had the inscription of Garuda instead of lion and also had religious inscriptions of Chandi and Narayana. The coins that were produced under Vijay Manikya were used to indicate some commemorations.
104497