Indian coins have always played a significant role, whether in history or the current era. History of coins in India is long and interesting. They have evolved from Punch Marked Coins to clear depicting minted coins of different denominations.
The Mughal Emperor Babur issued standard Timurid currency coins known as the shahrukhi, named after Shahrukh Mirza, Timur’s eldest son.
Babur's successor Humayun continued the minting of Shahrukhi-styled coins. Use of various zodiac signs became more prominent during the rule of Jahangir. The princely states like Hyderabad, Travancore have their own set of coins.
Under the British rule imperial currency with images of British monarchs were in vogue. The British monarch's portrait was replaced by the Lion Capital of Ashoka became a sovereign republic.
Let's take you to the tour of Coinage system of Modern India:

History of Coinage of India will remain inconclusive without the mention of coins of Awadh. When Ghaziuddin was ruler (1819) the coat of arms had two fish facing each other, two lions, two flags and a dagger surmounted by crown of the ruler.
He also placed his own fable in the form of a couplet. The name of the mint was also inscribed on the coin. The monetary system consisted of the gold ashrafi, the silver rupee and the copper fulus.
The gold asharfis and silver coins were available in half, quarter, eighth and sixteenth of an ashrafi. Initially, the first rulers issued only `fulus` in copper but Wajid Ali in his first year also issued its half, quarter and eight parts.
Coins of Mysore

The coins issued by Haider Ali in 1761 were called Pagoda and carried the motifs and iconographic forms of the Vijayanagar period with his initial, the letter `He` is inscribed on the reverse.
Tipu sultan minted coins in gold, silver and copper pagodas. His coins did not bear his name. He minted the rare ‘double pagoda’ and ‘four pagoda’ coins and very popular heavy silver coin called `double rupee'. Copper coins have elephant’s facade on them. 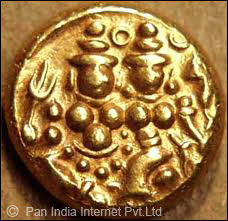 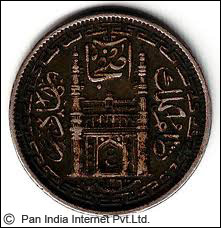 Origin of Indian coins to much extend depends on history of the region. You will be amazed to know that till 1707 the coins of the Nizams were issued in the name of the Mughal Emperor.
After the death of Auranzeb the Governor of Deccan, Nizan ul-Mulk decalred his independence and thus the state of Hyderabad came up. Later new coins were introduced and were known as `Hali Sicca`.
The rulers from Hyderabad minted coins which had `Char Minar' on obverse with Persian inscription Nizam-ul-mulk Bahadur Asaf Jah around it and its value on reverse. The metals and denomination corresponded to that of British.

Puduakkottai, a small princely state that merged in Republic of India in 1947, issued numerous copper coins of approximately 1.2 grams each.

The coins issued by Portuguese from Goa were in gold and silver. The gold coins were of the same size, value and weight as ‘Pagoda’ and were known as `Cruzado` or `Manoel`. The other three types of coins `Meio-manoel`, and `Meia-espera` and `Espera` in silver were also issued.

The gold `Manoel` and the silver `Espera` had the Cross o 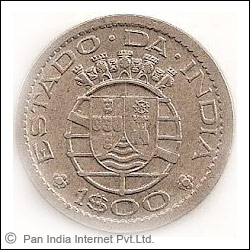 Since then the figure of Apostle St. Thomas was etched on their Indian coins with the letters S and T on one side of the coin and the crowned arm of Portugal with the initials of the reigning monarch on the other side of the coin. Later in 1728, the figure of the saint was substituted on the gold coins with his cross.
The design of the gold coins was modified from time to time. The gold coins of Portuguese came in the value of 20, 10, 5 and 2 `Xerafirms`. Several mints issued silver `Xerafirms` and copper `tutenag` coins. These coins had `DO`, `DD` or `OO` or the full name `DIO` inscribed on them.

The coins issued by Dutch were popularly known as `silver riders`. The obverse side of the coins bore a cavalryman on horseback and the provincial monogram with an inscription below it. Three `Guilder`, one `Guilder` and half `Guilder` in silver were also issued apart from `Ducatoons` by four of the provinces.
These coins contained the standing Pallas, the date and an inscription on one side and the other side of the coin bore the arms of the State-General, the value, the monogram of the Company and an inscription followed by the abbreviation of the name of the issuing province. 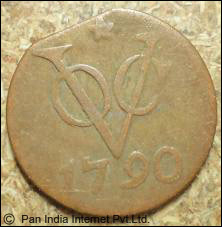 In 1726 copper `Doits` and in 1749 half `Doits` issued for the company. The Dutch Company also issued coins from Pulicat, Nagapatam, Masulipattam, Puducherry and Cochin.
The coins issued from Nagapatam or Masulipattam had a four armed deity on the obverse side and a convex granulated reverse.
The only silver coins known were the `Fanams` issued by Cochin which have the figure of a female deity on one side of the coin and the other side of the coin had a horizontal `J` surmounted by `OC` (Oostindische Compagnies) and twelve dots below it.

The historical evidences suggest that copper, lead and tin coins were also issued during Dutch period.

During the French colony, three denominations of silver coins;`Fanon`, double `Fanon` and half `Fanon` with a `fleur-de-lys` were issued. Silver `Rupees` were issued with Mughal inscriptions on the coins. Some of the coins bore the Hijri year and the corresponding regnal year of the Mughal emperor.
The `Doudo`, half Doudo` and `Cash` were the copper coins issued by the French.The later copper coins include `Biche` and half `Biche` that contained `fleur-de-lys` on one side and the date on the other side. 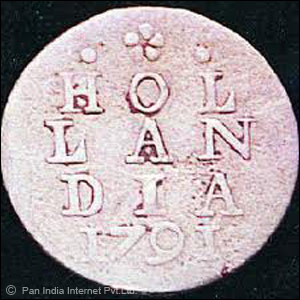 The British issued gold, silver, tin and copper coins for the local and commercial usage during their rule. The gold coins were termed Carolina, the silver coins as Anglina, the copper coins Cupperoon and tin coins Tinny.
The Coinage Act of 1835 called for issuing a uniform coinage. Coins with the effigy of William IV on the obverse and the value on the reverse in English and Persian were issued in 1835.
The coins issued after 1840 had the portrait of Queen Victoria engraved on them. After Queen Victoria Edward VII coins that were issued bore his effigy.

British Government stopped issuing silver coins after World war I. This saw the dawn of paper currency in India. British issued paper currency of One Rupee and Two and a half Rupees during their rule. The silver coins of smaller denominations were issued in an alloy, copra-nickel.

The coins of Western India during British rule developed both on Mughal as well as English patterns. English pattern coins were minted at the Bombay Mint.
Matthew Boulton is considered as "the father of modern coinage". In 1786, he made steam-driven coin-stamping machines. The coins had thick rims, incused legends, lettered edge and low die relief.
Coins of small denominations like two pence, penny, half penny and farthing coins were also made later. On whole we can say that coins of modern era or Coins of modern India issued by Britishers were much advanced compared to their ancient and medieval counterparts.
15534