Buddhism is a religion that holds one of the top three positions on being the widespread religions in the world. Founded by Siddharth Gautama in the 5th century BC, he attained enlightenment at a very young age by meditating under a peepal tree which is also known as the “Bodh tree”.
Since then, Siddhartha Gautam is known as the Samyasam Buddha, “The perfectly self-awakened one”. Buddha preached with his own teachings and gained followers from places. After his death, all of his followers settled as a different community.
Buddha left no successors and all of his teachings and philosophies were preached orally, hence leaving no written or scripted form. It was during the reign of King Asoka, that Buddhism became the religion of the state.
He was highly pleased with the teachings of Buddha and encouraged Buddhist activities in his kingdom thus extending the teachings of Buddha to farther places. The religion gained immense popularity in Sri Lanka and hence the Buddhist population increased here.
After the death of King Asoka, Kanishka who was the ruler of Kushan Empire encouraged and spread Buddhism in the state. However, Buddha was represented in the Human form in Gandhara Mahayana where the religion flourished and spread. 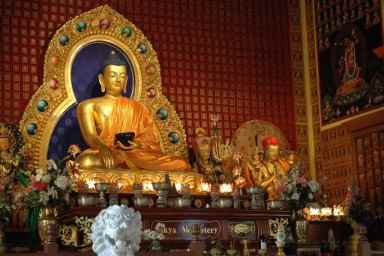 The ruler of Magadha, Bimbasara highly supported Gautam Buddha since he believed in Buddha’s teachings and doctrines. The Buddhist ‘Viharas’ were being established under the Magadha and the wheel of Dharma was set in motion after Buddha delivered sermons to five special followers who walked alongside him towards the path of enlightenment.

The first Sangha was formed by Buddha in the company of a few Buddhist Monks and hence the first Triple Gem was formed which were Buddha, Dharma and Sangha.
However, it is notable that the Sangha that Buddha formed held councils in order to reach consensus on matters related to Buddhist doctrine and practices.

Buddha teachings were simple and comprised of some basic principles. It consisted of 8 prime laws which all people need to follow in order to put an end to their sufferings known as the eight fold path. These along with four noble truths, when followed would help one to gain happiness in life.

The eight fold paths of Buddhism are as follows:

The four noble truths of Buddha are the ones which rule the life of people. They are:

•    Life is full of sufferings, is one of the insights of Buddha.
•    Suffering is caused by people’s want
•    Following the Eightfold path which can relieve you from all the problems
•    Suffering can be ended if people stop wanting for more power and other things.

Buddhism and its awareness:

Buddhism remained not limited to Indian borders but also spread beyond it. There are various evidences that suggest that it was primarily through trade relations that the religion expanded.
With the passage of time, it was seen that Buddhism got secluded in the northern parts of India with Kathmandu being the centre of Buddhism.
In the urban places of Kathmandu, even today we will find Indian Mahayana Buddhism that has been modified by mixing with Vajrayana and practiced by the local Buddhist Newar population.

In the 12th century, after the declination of the last dynasty supporting Buddhism, the Pala kingdom, the reach of Buddhism in India also started to decline. The  reach of the religion further weakened when various Muslim conquerors, especially during the Mughal dynasty, tried to destroy monasteries and spread the influence of Islam.
However, it was in the year 1891, that the revival of Buddhism began in India, when the Sri Lankan Buddhist leader Anagarika Dharmapala founded the Maha Bodhi Society.
Many activities were carried out in order to involve the promotion of Buddhism in India. In June 1892, a meeting took place at Darjeeling among the Buddhists, where Dharmapala spoke to the Tibetan Buddhists and presented a relic of the Buddha to be sent to the Dalai Lama.

Buddhism is now spread rapidly throughout India by many Theravadin schools of Hinayana and Tibetan Mahayan- Vajrayana Buddhist schools which has been set up in the recent years. Today Buddhism is regarded as a world religion, which is followed as a wheel of teaching.
2147