Islam word comes from an Arabic word which means “peace” and “submission”. A person who consciously follows Islam and believes in Islam is called a Muslim. Islam in India followed the 14% of the total population, is the second most practiced religion after Hinduism.
India's Muslim population is world's third largest and account for world's largest Muslim minority population. Islam came to India much before the Muslim invasions. Islamic influence first came to be felt in the early 7th century with the advent of Arab traders. It was indeed with the rise of Islam that Arabs became great force in the world.

The Advent of Muslim Religion

Islam religion is not a result of mass conversion but it took several centuries to adept this religion. India followed with the conversions of Indians into Muslims in the beginning of 8th century, when Arab invaded India. Mahmud Ghazni, who took a major part in the arrival of Muslims in India.
After the Muslim invasions, India was under the rule of several Muslim emperors who spread Islamic culture. India had a long stretch of Muslim rule under the Delhi Sultanate and the Mughal Empire.

The Delhi Sultanate and the Mughal rule saw the construction of the several Islamic mosques and forts in India and also the conversion of large number of people to Islam. All the forts and tombs which were constructed to show the introduction of their power and the dominance of religion.
Humayun’s tomb, Safdarjhung tomb, Taj mahal, Sanchi Stupa, Tomb of Sher Shah suri and Red fort, Golconda, Jaisalmer Fort, Gwalior fort, Tughlagabad fort were some the major contribution of them in Medieval India.

Many Mughal rulers were Hindus who had changed their religion to Islamic. Also, most of the Indian Muslims belongs to the lower caste were adapted themselves into Islam religion. It was the political patronage theory, because of which Indians were converted into Muslims.
In order to receive some non-religious favour especially in Punjab and Bengal, people changed their religion to Islam. It was believed that as they followed their rule, they tried to get relief from taxes and promotion in the bureaucracy. Many other local rulers also switched of their religion to Hinduism, after completing his rule.

The first Indian mosque Cheraman Juma Masjid was built in 629 A.D and there are enough evidence to prove that Muslims and Arabs interacted with Indians in the early phase of Islam.
The spread of Islam in India can largely be credited to Sufism, as many Sufi beliefs found their parallels in Indian philosophical literature, in particular nonviolence and monism. 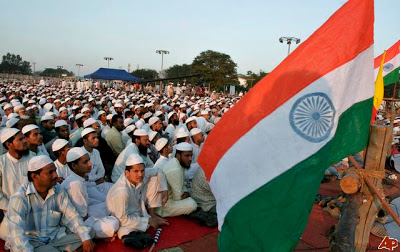