The Hindu sculptures and the Indo Islamic sculptures are very prominent in Indian history and various monuments and buildings having this form still exist.

Indian Sculpture had a new form by the renaissance of Hinduism during the reign of Gupta Empire from 5th century AD. This period of Ancient Age emerged with the new form of sculpture depicting different Hindu Gods and Goddesses. Craftsmen started crafting idols of popular Hindu Gods like Vishnu, Shiva, Krishna, the Sun-God, Goddess Durga and same were used in different temples built in the era. The classic specimen of that era is the Udagiri Caves in Madhya Pradesh which hold the giant image of Lord Vishnu.

The Medieval Period of Indian history marked the origin of new form, Indo-Islamic Sculptures, which was introduced by the rulers of Delhi Sultanate and later by Mughal Emperors.

The existing architecture and sculpture of that time was merged with the new additions of tombs, tall pillars, minarets and arched doorways. Domes festooned with the foliage sculptures were the main characteristic features of this kind of Indo Islamic sculptures. Even double domes and enameled tiles became popular during the Muslim era.

Later in the Medieval Age appeared Mughal Rulers who came up with their own style of architecture and sculpture.  The Mughal Sculpture were similar to the sculpture of Delhi Sultanate with the only change was that, these were more lavish and royal. The Mughal style of sculpture had few new additions also like ceramic tile work, Pietra Dura inlay with colored and semi-precious stones, carved and inlaid stonework. Foliage sculptures in between the arches are another exceptional feature. 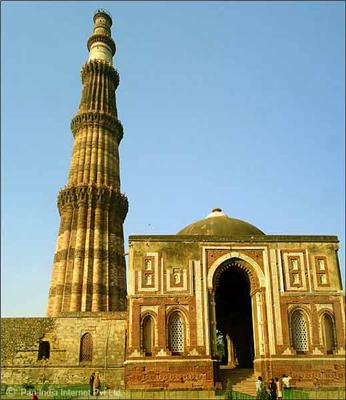 The Mughal sculpture was the amalgamation of both Hindu and Persian styles of Sculptures. Few of the typical features of Mughal Sculpture, influenced by Hindu Sculptures are richly ornamented carved piers and columns with stone construction and shallow arches made out of corbels while features reflecting the Persian Style of Sculpture are extensive use of tile work and the diwan as a central feature in mosques and domes. The peculiar features introduced by Mughals were chhatris (elevated, dome-shaped pavilions), chajjas (projecting eaves) and jarokhas (projecting balconies).

Some of the masterpieces of the Indo Islamic Sculpture are Qutub Minar, Alai Darwaza and Jami Masjid  from the period of Delhi sultanate and Taj Mahal, Jama Mosque and Red Fort from the Mughal Era.
7094