Different architectural forms and styles were employed for the construction of temples during ancient India. Find here some of the important styles used that have laid there marks on Indian history. 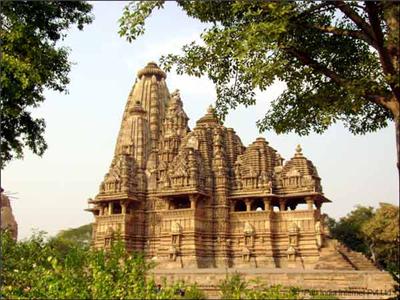 The specific features of this particular style of architecture are presence of beehive-shaped and multi layered tower, called ‘Shikhara’. A large round cushion-like element called ‘amalaka’ is present on the top of the layers of this tower or ‘Shikhara’. The basic platform for the temple is square but sometimes due to the segmented walls it appears circular in shape.

This style of architecture was further modified in the later periods in which the central shaft was surrounded by many smaller reproductions of itself, which appeared like a fountain.

The most prominent examples of this style of architecture are temples of Khajuraho in Madhya Pradesh, Sun temple in Konark, Sun temple in  Modhera, Gujarat and Ossian temple, Jain temples of medieval period like Solanki temple in Gujarat.

Dravidian style of architecture appeared in Indian subcontinent a long back during the reigns of Pallavas, Cholas, Pandyan, Chera, Chalukyas, Rashtrakutas, Hoysalas and Vijayanagara.

The style mainly comprises of pyramid shaped temples made by intricate carving of stones to give the form of statues of deities, warriors, kings, and dancers. The specimens of the Dravidian style of architecture are currently present in the Southern Indian states of Tamil Nadu, Andhra Pradesh, Kerala, and Karnataka. The finest examples of Dravidian style are temples of Tanjore, Madurai, Mahabalipuram, Badami, Pattadakal and Kanchipuram.

Hoysala style of architecture developed mainly in South India in the reign of the Hoysala Empire from 11th to 14th century. The Hoysala style appeared between the Indo Aryan and Dravidian traditions. Numerous temples were built, based on this building style by the Hoysala Emperors in the Medieval Age of Indian history.

These temples were built of chloritic schist or fine grained soap stone which enabled builders for intricate sculptural carvings, further beautifying the temples. The chloritic schist is the type of soft stone, so carving it gets easier but later becomes hard on exposure to air. The sculpted figures on the walls of these temples depict the lifestyle of the Hoysala times. 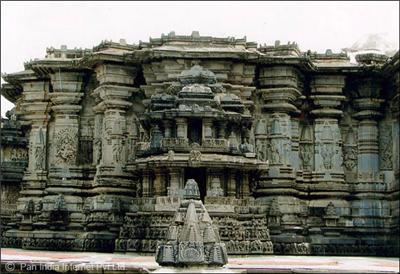 The Hoysala style of architecture has few peculiarities like the main structure of all temples, stands on the raised platform and pillars in all temples are with horizontal moldings. The other distinctive feature of this Hoysala style of architecture is presence of well sculptured grilled windows and existence of sikharas in well defined horizontal tiers.

There are about 100 temples of this Hoysala style still present in the Karnataka, making the Indian heritage richer. These temples are the major tourist attractions in the state. Few of the examples of the Hoysala architectural style are Chennakesava Temple at Belur, the Hoysaleswara Temple at Halebidu and the Kesava Temple at Somanathapura.

Cave form of architecture in the form of temples was prominent throughout western India like the one present at Ajatna and Ellora.
24594