The Theosophical society was formed by Russian born occultist, H.P. Blavatsky and her American colleagues, B.S. Olcott, W.Q. Judge and thirteen others in New York on 17 November, 1875. This universal body believes in brotherhood and universal oneness irrespective of any caste, creed or religion. Theosophy is the wisdom underlying all religions when they are stripped of accretions and superstitions.

The initial motivation was to investigate and study the mediumistic phenomena. Late in 1882, Adyer in Madras, India was chosen as official International headquarters.

The main objectives of the Theosophical Society were: 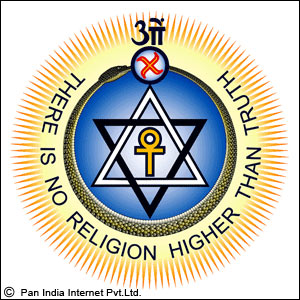 Further in the year 1889, Blavatsky informed a group of Theosophy students that apart from the above motives the real purpose of establishing the Society was to prepare humanity for the reception of the international teachings.

However soon after the death of Blavatsky, the organization split. The original organization supervised by Olcott and Besant is still in India and is known as the Theosophical Society - Adyar. The section led by Judge is today known as the Theosophical Society, but often with the advisory statement, "international headquarters, Pasadena, California".
7330

Comments / Discussion Board - The Theosophical Society