Baba Amte was a great social worker and activist who dedicated his whole life to serve poor people suffering from leprosy. His full name was Murlidhar Devidas Amte but popularly was called as Baba Amte.

He was highly influenced by Rabindranath Tagore and Mahatma Gandhi for social work. He also worked as the defense lawyer for imprisoned leaders of the Quit India Moment in 1942. Baba Amte passed his whole life in social service and started many organizations like Maharogi Seva Samiti, and 'Anandawan' providing a self sustained decent life to more than 3000 leprosy patients in India. 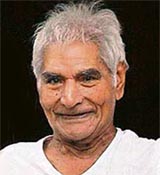 Recipient of many awards on the national and global grounds, Baba Amte surely proved to be the proud of the nation, few of the most important awards received by him were United Nations Human Rights Award, and the Magsasey Award,  Padmavibhushan from the Indian Government, Damien-Dutton Award, U S A 1983 (highest international award in the field of leprosy).