Young Bhagat Singh“If the deaf are to hear, the sound has to be very loud. When we dropped the bomb, it was not our intention to kill anybody. We have bombed the British Government. The British must quit India and make her free."
Bhagat Singh is a popular Indian revolutionary. He is considered as one of the most influential nationalist leader of Indian Independence movement. Bhagat Singh is often referred to as ‘Shaheed’ Bhagat Singh. The word ‘Shaheed’ means a martyr. 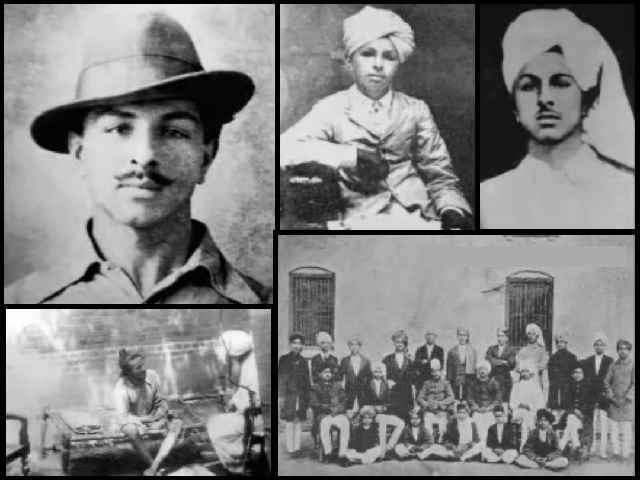 Bhagat Singh was born on 28th September 1907 in a Jat Sikh Punjabi family to Kishan Singh Sandhu and Vidyavati Kaur. He was born in Chak no. 105 in the village of Banga, Jaranwala Tehsil in the Lyallpur district of the Punjab province of British India.
Bhagat Singh’s family is a patriotic family, the members of which have participated in the Indian independence movement. Some of their members have also served in Maharaja Ranjit Singh’s army. Bhagat Singh’s ancestors hailed from the village of Khatkar Kalam near the town of Banga in Nawanshah district of Punjab.
His father and his uncles Ajit Singh and Swaran Singh were members of the Ghadar Party which was led by Kartar Singh Sarabha and Har Dayal.
In the year 1919, when Bhagat Singh was 12 years old, he visited the site of the Jalianwala Bagh massacre, where a public meeting was held by a group of non violent people, and the people were fired upon by soldiers without warning.
Bhagat Singh also took part in Mahatma Gandhi’s Non-Cooperation Movement in 1920 and openly defied the British by following Gandhiji’s wishes of burning his government school books and any imported British clothing he could find

When Bhagat Singh was 14 years old, he welcomed protesters against the Gurudwara Nankana Sahib firing of 20 February 1921 which killed a large number of unarmed protesters. He welcomed them to his village for the protest.
In the year 1922, he joined the Young Revolutionary Movement advocating the violent overthrow of the British Empire in India. He did not favored Mahatma Gandhi’s philosophy of non violence and was disillusioned after Gandhiji called off the non cooperation movement.
Bhagat Singh studied European revolutionary movements and was attracted to anarchist and Marxist ideologies. He also became involved with numerous revolutionary organizations and quickly rose through the ranks of the Hindustan Republican Association (HRA) to become one of its main leaders and eventually changed the name of the association to Hindustan Socialist Republican Association (HRSA).
The association had prominent leaders such as Ram Prasad Bismil, Chandrasekhar Azad and Asfaqulla Khan. In the year 1923, Bhagat Singh joined the National College in Lahore. He excelled both in studies and extra curricular activities during his student life.
In the year 1923, Bhagat Singh won an essay competition set by the Punjab Hindi Sahitya Sanmelan. In his essay titled ‘Punjab’s Language and Script’, he wrote Punjabi literature and showed a deep understanding of the problems of afflicting Punjab. Bhagat Singh joined the Indian nationalist youth organization ‘Naujawan Bharat Sabha’ along with fellow revolutionaries and became popular in the organization.
During a Dussehra celebration in October 1926, a bomb blasted in Lahore. Bhagat Singh was arrested for his alleged involvement in the Dussehra bomb blast case on 29th may 1927 and was subsequently released for exhibiting good behavior with a fine of Rs. 60,000.
In September 1928, an All-India meeting was organized by the Kirti Kisan Party which included the revolutionaries in Delhi as Singh as its secretary. Bhagat Singh later became the association’s leader.

Both Bhagat Singh and Batukeswar Dutt were charged with attempt to murder and the trail began on 7th May 1929. There were doubts which rose about the accuracy of the testimony offered at the trial. One of the key discrepancies was the possession of a pistol by Bhagat Singh.
The both accused were sent to the Sessions court of Judge Leonard Middleton who ruled that Singh and Dutt’s actions have been deliberate as the bombs had shattered the one and a half inch deep wooden floor in the hall.
Their appeal was subsequently turned down and both were sentenced to 14 years of rigorous imprisonment. On 15th April 1929, the ‘Lahore bomb factory’ was discovered by the police which led to the arrest of the other members of HSRA out of which seven members turned informants and helped the police to connect the murder of Saunders with Bhagat Singh. Subsequently, Bhagat Singh, Sukhdev Thapar and Shivram Rajguru were charged with the murder of Saunders.
Bhagat Singh’s life sentence in the Assembly Bomb case was deferred till the Saunder’s case was decided and he was transferred to the Mainwali jail from the Delhi jail where he witnessed discrimination between the European and Indian prisoners.
The activities of the hunger strikers has gained popularity and attention among the people, the government decided to begin with the Saunder’s murder trial which was later called the Lahore Conspiracy Case. Bhagat Singh was later shifted to Borstal jail where the trial began on 10th July 1929.
In addition to charging with the murder of Saunders, Bhagat Singh along with 27 other prisoners were also charged with plotting a conspiracy to kill Scott and waging a war. During that time, the health of another hunger striker, Jatindra Nath Das, logged in the same jail was deteriorating considerably.
Subsequently he was released on bail and on 13th September 1929, he died after a 63 day hunger strike. This death led to protests around India. Bhagat Singh then finally heeded to a resolution of the Congress party and his father’s request and ended his 116 day long hunger strike on 5th October 1929.
During his strike, Bhagat Singh became popular among the Indians. Meanwhile, as the Saunder’s murder trial was running slow, the Viceroy, Lord Irwin declared an emergency on 1st May 1930 and promulgated an ordinance setting up a special tribunal which composed of three high court judges.
The ordinance cut short the normal process of justice and on July 1930, the tribunal decided to press charges against only 15 out of 18 accused. The tribunal conducted the trial from 5th May 1930 to 19th May 1930.
On 7th October 1930, the tribunal delivered its 300 page judgement based on all the evidence and concluded that involvement of Bhagat Singh, Sukhdev and Rajguru was proved beyond any doubt in Saunder’s murder and sentenced them to death by hanging.
Bhagat Singh used to maintain a diary in the prison which eventually grew to include 404 pages. In the diary, he made notes regarding different sayings and quotations of various people he came across.
There were prominent sayings of Karl Marx and Friedrich Engels. Singh also wrote a pamphlet entitled ‘Why I am an Atheist’ in response to him being accused of vanity by not accepting God in the face of death. It is also said that Bhagat singh signed a mercy petition through a comrade Bijoy Kumar Sinha on 8th March 1931.

On 15th August 2008, an 18 foot tall bronze statue of Bhagat Singh was installed in the Indian parliament next to the statues of Indira Gandhi and Subhas Chandra Bose. A portrait of Bhagat Singh and Batukeswar Dutt also adorns the wall of the Parliament House.
Bhagat Singh was cremated in Hussainiwala on the banks of the Sutlej River. During partition, the cremation spot went to Pakistan. However, on 17th January 1962, it was transferred to India in exchange for 12 villages near the Sulemanki Headworks to Pakistan.
The National Martyrs Memorial was built on that cremation spot in 1968. The memorial is located one km from the India-Pakistan border on the Indian side and has memorials of Singh, Rajguru and Sukhdev. Every year on 23rd March, the ‘Shaheedi Mela’ is observed at this memorial in which thousands of people pay their homage.
This day is also observed across the state of Punjab. The Shaheed-e-Azam Sardar Bhagat Singh Museum in Khatkar Kalan, Bhagat Singh’s native place was opened on his 50th death anniversary. The museum holds memorable belongings of Bhagat Singh, his half burnt ashes, the blood soaked sand and blood stained newspaper in which the ashes were wrapped.
A page of the first Lahore Conspiracy Case judgement through which Kartar Singh Sarabha was sentenced to death and on which Bhagat Singh put some notes are also displayed there. A copy of the Bhagavad-Gita with Bhagat Singh’s signature which was given to him in Lahore jail and other personal belongings are also there in the museum.
The Bhagat Singh Memorial was built in the year 2009 in Khatkar Kalan. The Supreme Court established a museum to display landmarks in the history of India’s judicial system. The first exhibition which was organized was the ‘Trial of Bhagat Singh’ which opened on 28th September 2007 on the birth centenary celebrations of Singh.
The youth of present day India still draw immense inspirations from Bhagat Singh. He was voted as the ‘Greatest Indian’ in a poll by the Indian magazine ‘India Today’ in the year 2008 ahead of Subhas Chandra Bose and Mahatma Gandhi.
During the centenary of Bhagat Singh’s birth, a group of intellectuals set up an institution named Bhagat Singh Sansthan to commemorate Bhagat Singh and his ideals. The Indian parliament paid tributes and observed silence as a mark of respect in the memory of Bhagat Singh on 23rd March 2001 and 2005.

Portrayal of Bhagat Singh in Literature and Movies

Bollywood films have been made portraying Bhagat Singh and his life. The first is ‘Shaheed-e-Azad Bhagat Singh’ (1954) followed by ‘Shaheed Bhagat Singh’ (1963) starring Shammi Kapoor as Bhagat Singh. After two years, Manoj Kumar portrayed Bhagat Singh in the film ‘Shaheed’.
After that three more landmark films were released in the year 2002 based on his life. The first one ‘Shaheed-E-Azam’ was directed by Sukumar Nair and starred Sonu Sood. The second was ‘23rd march 1931: Shaheed’ where the character of Bhagat Singh was portrayed by Bobby Deol.
Another film ‘The Legend of Bhagat Singh’ the character was portrayed by Ajay Devgan. The 2006 film ‘Rang De Basanti’ draws parallel between the revolutionaries of Bhagat Singh’s era and modern India youth.
In the year 2008, the Nehru Memorial Museum and Library (NMML) and Act Now for Harmony and Democracy (ANHAD), a non profit organization, co-produced a 40 minute documentary in Bhagat Singh titled ‘Inquilab’ and were directed by Gauhar Raza.
There are many songs portraying the patriotism of Bhagat Singh and his fellow revolutionaries. The patriotic Hindi-Urdu songs ‘Sarfaroshi ki Tamanna’ and ‘Mera Rang De Basanti Chola’ while created by Ram Prasad Bismil are largely associated with Bhagat Singh’s martyrdom and have been used in a number of films portraying the character of Bhagat Singh.
In the year 1968, a postal stamp was issued in India commemorating the 61st birth anniversary of Bhagat Singh. On September 2006, the Indian Government decided to issue commemorative coins in his memory. However, the coins have still not been issued.
Explore more about glorious history of India
5380