Chyandragupta Maurya, a disciple of Chanakya was the first ruler in Indian History who consolidated almost whole of India and for the first time ruled the unified India. It was Chankaya who felt the need of a strong empire that can withstand against the foreign Invasion. 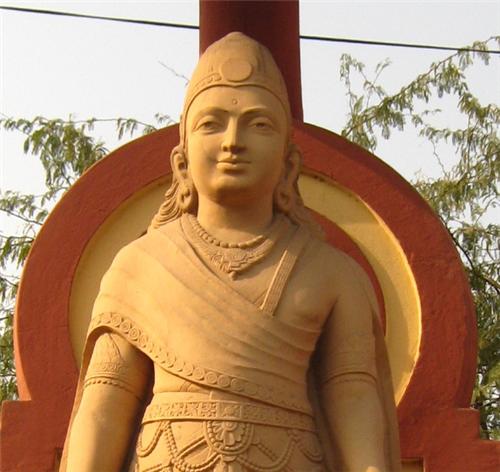 Maurya was gifted with great administrative and military skills, which sharpened by Chanakya led him towards the establishment of the Mauryan Empire. His empire extended from Bay of Bengal in the East to Arabian Sea in the West, also including the Western Territories of Southern Afghanistan and parts of Persia.
One of the greatest emperors of India, Chandragupta Maurya was the founder of the Maurya Empire.
He conquered most of the Indian subcontinent and his empire extended from Bengal and Assam to Afghanistan and Baluchistan, parts of Iran, to Kashmir and Nepal and to the Deccan plateau.
His grandson was Ashoka who later became one of the greatest emperors of India.

Chandragupta Maurya was born around 340 BCE. The origin of Chandragupta has been referred to in different ways. According to some his life is connected to Nanda Dynasty of Magadha in Bihar. While the Buddhist texts describe him as a section of the Khattya clan named “Moriya”.
His son was Bindusara and his grandson Ashoka who later became one of the greatest emperors of India. The Greek and Latin sources refer to him as “Sandracottos” or “Andracottus”.
During the later part of his life he relinquished his throne and become a monk. He led a frugal life and starved to death it is said. He was succeeded by his son in 298 BC.

Chandragupta Maurya was one of the greatest emperors of India. He conquered most of the Indian subcontinent. His empire extended from Bengal and Assam to Afghanistan and Baluchistan, parts of Iran, to Kashmir and Nepal and to the Deccan plateau.
Chanakya was Chandragupta Maurya’s teacher. He was the main architect of the establishment of the Maurya Empire and the rise of the Chandragupta to power. He was the chief advisor of Chandragupta and his son Bindusara.
Chanakya and Chandragupta Maurya have been credited with defeating the Nanda Empire and establishing the Maurya Empire in Northern India. Under the guidance of Chanakya the destruction of the Dhana Nanda Empire was planned by Maurya.
He and Chandragupta signed a pact with Parvataka of Northwest India which ensured his victory over the Nanda Empire. The empire was later divided between Parvataka and Chandragupta. Chanakya saved Chandragupta from several of the attacks of his enemies.
He continued to serve as the advisor to Chandragupta after the establishment of the Maurya Empire. According to popular legends he used to add small dose of poison in the food of Chandragupta in order to make him immune to the poisoning of the enemies.
Chandragupta once fed the food to his wife not immune to poison and she died. Chanakya cut open the belly of the queen and extracted the fetus. The baby born was named as Bindusara. Chandragupta defeated the Macedonian satrapies in the Northwest.
He later founded a vast empire which extended form the Bay of Bengal to the Indus river. He further expanded his empire in the later years. He later annexed Seleucus’ eastern Persian province. He defeated the generals of Alexander in Afghanistan.