Rabindranath Tagore was a Bengali polymath. He was the first non-European to win the Nobel Prize in literature in 1913.  He introduced new prose and verse forms and use of colloquial language into Bengali literature.
He is the exceptional creative artist of modern India. He was the genius behind the national Anthem of three countries, India, Bangladesh and Srilanka.
“Gitanjali” (Song Offerings), “Ghore Baire” “Gora” and Manasi” poems are his best known works. 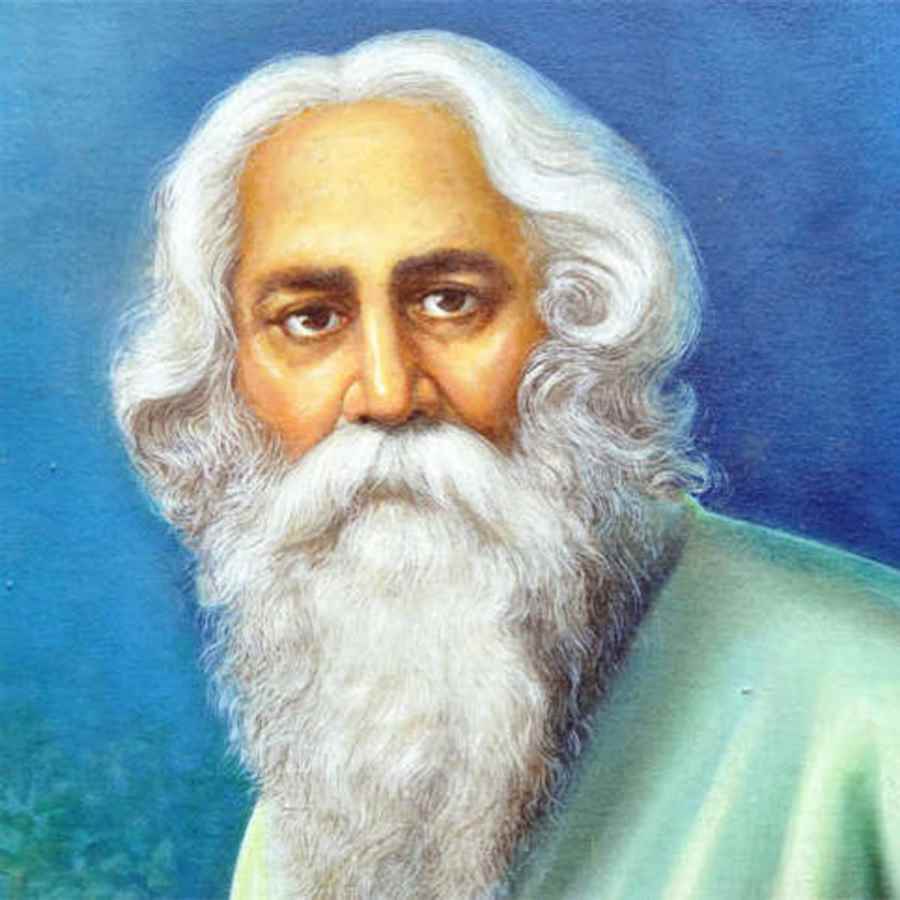 Tagore wrote novels, essays, short stories, travelogues, dramas, songs, autobiographies. In 1915 the British Crown granted him a Knighthood. However he returned it after the 1919 Jallianawala Bagh massacre. He is also called “Kabiguru” and “Gurudev”

Rabindranath Tagore was born in the Jorasanko mansion in Calcutta. He was born to Debendranath Tagore and Sarada Devi. He belonged to a Pirali Brahmin from Calcutta.
His family patriarchs were the Brahmo founders of the Adi dharma faith. His mother died when he was still a young boy. He was therefore raised by his servants.
He was taught and trained by his brother Hemendranath. In 1873 he went to a tour with his father to the Raj. They also visited his father’s Santinekatan estate.
This time he read the biographies of different figures. His father wanted him to become a barrister. Tagore enrolled at a public school in Brighton, East Sussex in 1878. In 1912 Tagore began touring the US and the UK.
In 1927 he began on a tour of Southeast Asia. In his travels he interacted with Mussolini, Henri Bergson, Albert Einstein, Robert Frost, and George Bernard Shaw etc. Gurudev died on August 7, 1941 at the age of 80. 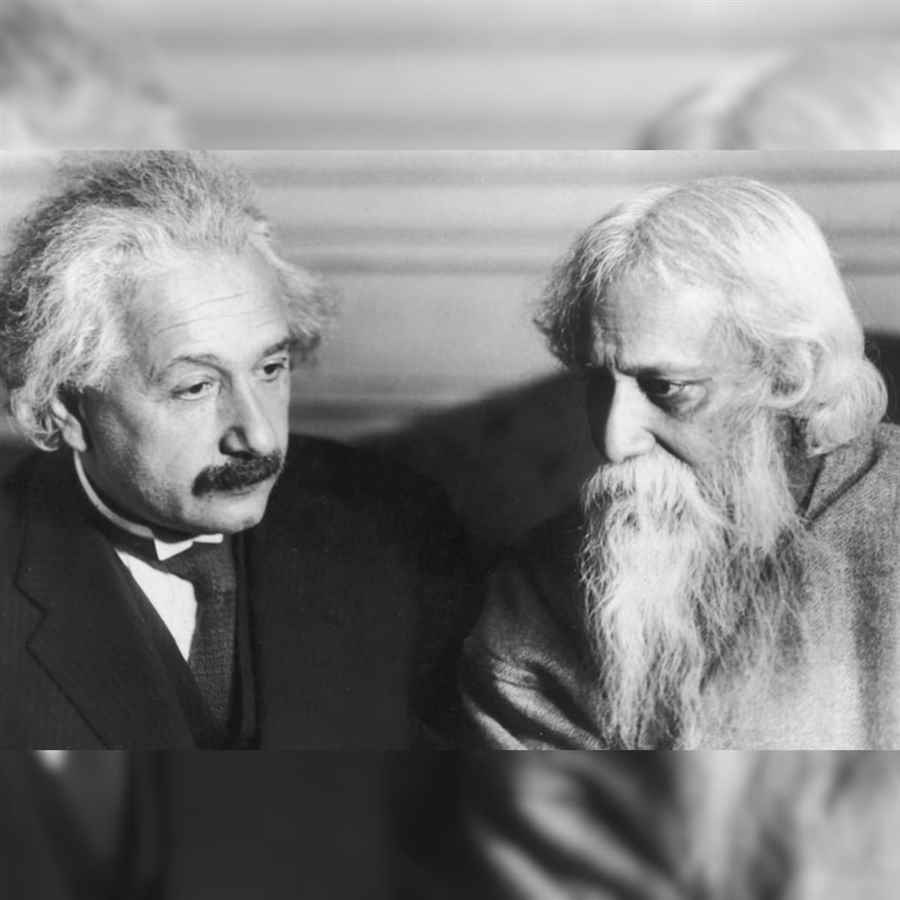 Tagore wrote novels, essays, short stories, travelogues, dramas and songs. His short stories are most highly regarded. He originated the Bengali language version of the genre. He modernized Bengali art by spurning rigid classical forms and resisting linguistic strictures.
His works are noted for their rhythmic, optimistic and lyrical nature. He wrote autobiographies also.  His travelogues, essays and lectures were compiled into several volumes including “Europe Jatrir Patro” and “Manusher Dhormo”. His “Gitanjali” (Song Offerings), “Ghore Baire” and “Gora”are his best known works.
At the age of 16 he released his first substantial poems under the pseudonym “Bhanusimha”. In 1877 he completed a major set of work. One of then was a long poem in the Maithili style of Vidyapati. They were accepted by the regional experts as a lost works of Bhanusimha, a newly discovered 17th century Vaishanava poet.
“Bhikharini” he debuted the short story genre in Bengali. His “Sandhya Sangit” includes the famous poem “Nirjharer Swapnabhanga”. In 1890 he released his “Manasi” poems among his best known works.
The period 1891-1895, Tagore’s “Sadhana” period was his most productive as in this years he wrote more than half the stories of the three volume, 84 story “Galpaguchchha”. He wove the process of science, the narrative of scientists into stories in “Se”, “Tin Sangi” and “Galpasalpa”.
In 1912 he took a bunch of his translated works to England where they gained attention from poets like William Butler Yeats. Yeats wrote the preface to the English translation of “Gitanjali”. His works have been translated into English, Dutch, German, Spanish and other European languages.
“Gitanjali” is Tagore’s best known collection of poems. This earned him the Noel prize for literature. “Manasi”, “Sonar Tori”, “Balaka”, “Purobi”, “Africa”, “Camalia” are among his better known poems. His poems have been set to music by composers.
Gitanjali is a collection of 103 English poems, largely translations. The volume became very famous in the West and was widely translated. It is also the title of an earlier Bengali volume of 157 mostly devotional songs. The poems of “Gitanjali” express a largely metaphysical outlook. It talks about the union with the “supreme’.
Tagore wrote eight novels and 4 novellas. “Chaturanga”, “Shesher Kobita”, “Char Odhay”, “Noukadubi”, “Ghare Baire”, “Jogajog” are among his prominent writings. His “Gora” is nominated by many Bengali critics as his finest tale. Tagore’s three volume “Galpaguchchha” comprises of 84 stories.
Tagore composed 2,230 songs. His songs “Rabindrasangit” merge fluidity into literature. Most of the songs are lyricised. It uses Indian classical music and traditional Folk music as source. “Rabindrasangit” is a distinctive genre in the music of Bengal, popular in India and Bangladesh.
Tagore influenced sitar maestro Vilayat Khan and sarodiyas Buddhadev Dasgupta and Amjad Ali Khan. In 1971 “Amar Sonar Bangla” became the national anthem of Bangladesh.
“Jana Gana Mana” was first sung in 1911 at the Calcutta Session of the Indian National Congress. It was adopted in 1950 by the Constituent Assembly of the Republic of India as its national anthem.
Tagore wrote his first drama –opera “Valmiki Pratibha” at the age of 20.  His play “Dak Ghar” is another of his landmark plays. “Visarjan” is regarded as his finest drama. His “Chandralika”, “Raktakarabi”, “Chitrangada” and “Shyama” are his key plays.
Chandralika”, “Chitrangada” and “Shyama” are his key plays that have dance drama adaptations, which are together known as Rabindra Nritya Natya.  Tagore’s memoirs include “Jivansmriti” and “Chhelebela”.
Gurudev was a prolific painter as well. At the age of 60 he took up drawing and painting. His paintings were exhibited throughout Europe. Gurudev opposed imperialism and supported Indian nationalists.
He wrote songs lionizing the Indian independence movement. “Chitto Jetha Bhayshunyo and “Ekla Chalo re” gained mass appeal with the later favored by Gandhi.
As a humanist, Universalist, internationalist and stringent anti-nationalist he denounced the Raj and advocated independence. He was an exponent of the Bengal renaissance.
In the early 1930s Tagore targeted “abnormal caste consciousness” and untouchability. He penned Dalit heroes for his poems and dramas. He campaigned successfully to open Guruvayoor Temple to dalits.
The foundation stone of the Vishwa Bharti was laid on December 24, 1918. Tagore sought to make Shantiniketan the connecting thread between India and the world. Tagore’s vision became what is now a university town Vishwa Bharati that attracts thousand s of visitors every year.
Tagore started Patha Bhavana, the school of his ideals, whose central premise was that learning in a natural environment would be more enjoyable and fruitful. After Tagore received the Nobel Prize the school was expanded into a University.
Some of the illustrious students of the university became Gayitri Devi, Indira Gandhi, Amartya Sen, and Satyajit Ray etc. Tagore wrote many of his literary classics in Shantinekatan. The place has become an important tourist destination. Kala haven, the art college of Santiniketan is still considered one of the best art colleges in the world.
The novels and short stories of Gurudev have been filmed. The only film directed by Tagore is “Natir Puja”. His ”“Kabuliwala”, “Char adhyay”, “Chokher bali”, “Nauka dubi”, “Ksudhita Pashaan”, “Teen Kanya”, “Nastanirh”, “Ghare Baire", and so on have been filmed.

Awards and Honours of Rabindranath Tagore 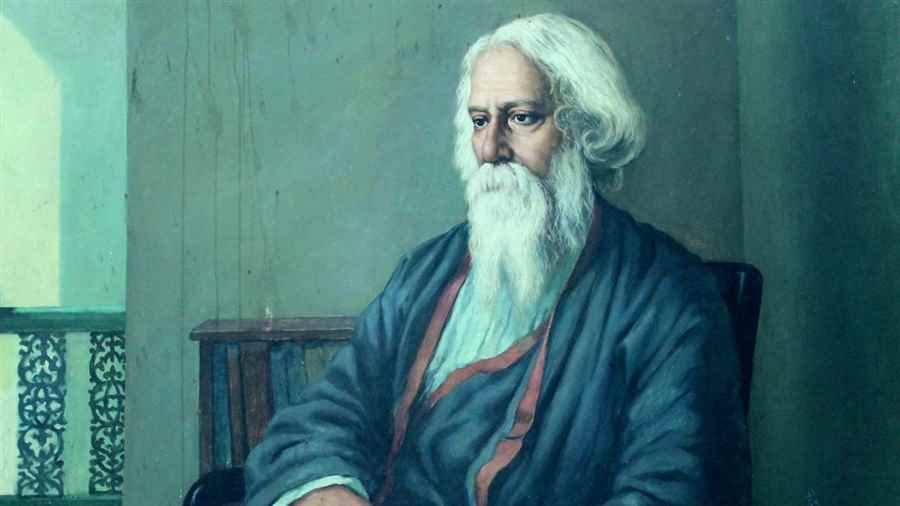 Gurudev received the Nobel Prize in Literature in 1913. In 1915 the British Crown granted him a Knighthood. A bust of Rabindranath Tagore is also there. Every year on 25–27 Baishakh (after the Bengali New Year Celebration), cultural programs are held here which lasts for three days.
Explore more about glorious history of India.