The Mahabharata is one of the major Sanskrit epics of ancient India. It has been called the national epic of India, and it is that, in very much the same sense that the Iliad is the national epic of Classical Greece. Traditionally, the authorship of the Mahabharata is attributed to Vyasa.
The first section of the Mahabharata states that it was god Ganesha who, at the request of Vyasa, wrote down the text to Vyasa’s dictation. Ganesha is said to have agreed to write it only on condition that Vyasa never pause in his recitation. Vyasa agreed, provided Ganesha took the time to understand what was said before writing it down.

There have been many attempts to unravel its historical growth and compositional layers. The oldest preserved parts of the text are not thought to be appreciably older than around 400 BCE, though the origins of the story probably fall between the 8th and 9th centuries BCE. 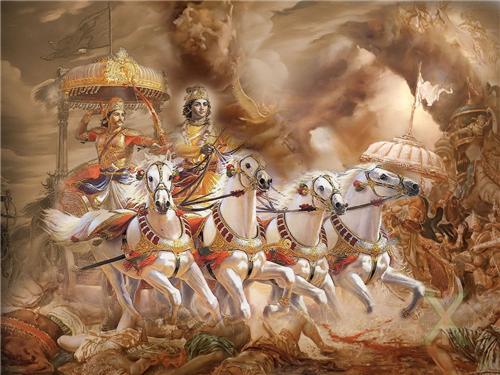 Mahabharata has the honor of being the longest epic in world literature which consists of over 100. 000 shloka or over 200,000 individual verse lines and long prose passages.
About 1.8 million words in total, the Mahabharata is roughly ten times the length of the Lliad and Odyssey combined, or about four times the length of the Ramayana. Hence, it can be said that the Mahabharata resembles a long journey with many side roads and detours.

The Mahabharata tells us about the great battle that was fought on the field of Kurukshetra between the five sons of King Pandu and their allies on one side and the hundred sons of King Dhritarashtra, with their allies on the other side.
The battle tells us about the culmination of a long history of struggle and diplomatic maneuvering, and it involved virtually every tribal king and every powerful city-state in Central and Northern India at that time.

The tragic war of Mahabharata pitted brothers against brothers, sons against fathers and uncles, brave noble men against brave noble men, which devastated the whole family.
Nearly all of the best men died in the long battle of Kurukshetra, only the Pandavas survived but there was no victory as the war destroyed the world and the emptiness of what they had won colored the rest of their lives.

Research on the Mahabharata brings out some elements that can be traced back to the Vedic times. However, the background of Mahabharata suggests the origin of the epic occurs after the very early Vedic period and before the first Indian empire was to rise in the third century B.C.
913