The Mauryan Empire was established by Chandragupta Maurya which lasted from 322 B.C to 185 B.C. Chandragupta Maurya, who had overthrown the Nanda Dynasty and rapidly expanded his power westwards across central and western India taking advantage of the disruptions of local powers in the wake of the withdrawal westward by Alexander the Great's Greek and Persian armi 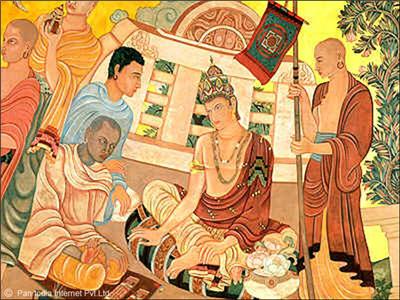 es.
By 320 BCE the empire had fully occupied Northwestern India, defeating and conquering the satraps left by Alexander.

In Indian History, the Mauryan empire originated from the Magadha Kingdom that is located on the Indo-Gangetic plains. These now form the major part of the states of West Bengal and Bihar.
Other than Chandragupta Maurya, the Mauryan Empire was flourished by Bindusara, who was the successor of Chandragupta Maurya and Ashoka the Great, who  was the next emperor after the demise of Bindusara.

The main targets of Bindusara were the regions in the southern parts of India. Because of the scarcity of information about Bindusara from the ancient Indian history, little is known about this ruler from the Maurya dynasty.
Bindusara's mother was Durdhara. According to the information in Puranas the duration of the reign of Bindusara was for a period of 25 years, almost same as his father.

Then came Ashoka the Great, who was also known as Ashokabardhan Maurya.  Ashoka would have remained the Ashokabardhan for the whole of his life if he would not have come to the noble realization that he had when he visited the battlefield where the Kalinga war was fought.
Ashoka invaded Kalinga and became victorious claiming the lives of at least 100000 soldiers and civilians. Nearly ten thousand soldiers who were fighting for Ashoka, also lost their lives. Ashoka was overwhelmingly pained at the loss of so many lives.

With an area of 5,000,000 km, Mauryan Empire was one of the world's largest empires in its time, and the largest ever in the Indian subcontinent.
It is also one of the strongest and geographically widespread dynasties of all times.  The Mauryan empire stretched its reign along Himalyas throughout North and towards East up to what is presently known as Assam.

After the Kalinga War, Asoka began to spread the teachings of Buddha which propagated not only religion but his ideas on society as well.
The rock edicts and inscriptions spread Buddhism and values of virtue and peace. This he called Dhamma or Sanskrit Dharma. Asoka also spread the teachings of Buddhism to his neighbours by sending envoys to various places including Sri Lanka, Burma and other Southeast Asian countries.

The Mauryan empire lasted for over 50 years and saw signs of decline after the death of Asoka. Financial crisis, brahmmanical reaction, weak successors and neglect of the northwest frontier are some of the reasons for the decline of the Mauryan empire.

Important Features of the Mauryan Empire