The Ramayana is an ancient Sanskrit epic. It is one of the two great epics of India, the other being the Mahabharata and is ascribed to the Hindu sage Valmiki and forms an important part of the Hindu canon considered to be itihasa. Ramayana tells about life in India around 1000 BCE and offers models in dharma.

The Ramayana depicts the duties of relationships, portraying ideal characters like the ideal father, ideal servant, the ideal brother, the ideal wife and the ideal king. It consists of 24,000 verses in seven books  and 500 cantos (sargas), and tells us the story of Rama (an avatar of the Hindu preserver-God Vishnu), whose wife Sita is abducted by the king of Sri Lanka, Ravana.

Ramayana is the immortal tale of Shri Rama that teaches us the values of ideology, devotion, duty, relationships, dharma and karma. Rama is the prince of Ayodhya and his wife Sita are regarded as the ideal royal couple. Rama is brave, wise and dutiful, and Sita is beautiful, generous and saintly. 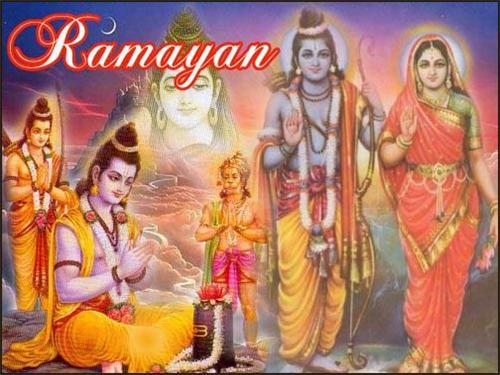 Dasharatha, the king of Ayodhya, had three wives and four sons. Rama was the eldest and his mother was Kaushalya. Bharata was the son of his second and favorite wife, Kaikeyi. The other two were twins, Lakshmana and Shatrughna from his third wife Sumitra.

Rama’s step-mother, Dasharatha’s second wife, Kaikeyi, wants her son, Bharata, to become the king of Ayodhya, instead of Rama. So, instead of being crowned king of Ayodhya, Rama was sent into exile in the forest for fourteen year by an intrigue in the palace and a quirk of fate.

Rama goes to the forest, accompanied by wife Sita and brother Lakshmana, and they live as recluses among the hermits that lead a life of meditative retreat in the deep woods. There during their fourteen years of exile in the forest, Sita was abducted by the ten-headed ruler of Lanka, the demon king Ravana. It was then the Rama’s pursuit to rescue her began, aided by Lakshmana and the mighty monkey-general Hanuman.

They attacked Ravana’s army, and after a fierce battle, succeed in killing the demon king and freeing Sita, reuniting her with Rama. After fourteen years of forest exile, Rama and Sita returned to Ayodhya and were warmly welcomed back by the citizens of the kingdom, where they ruled for many years.

Traditionally, the Ramayana is attributed to Valmiki, regarded as India's first poet.  The Indian tradition is unanimous in its agreement that the poem is the work of a single poet, the sage Valmiki, a contemporary of Rama and a peripheral actor in the drama. The story's original version in Sanskrit is known as Valmiki Ramayana, dating to approximately the 5th to 4th century B.C.
863