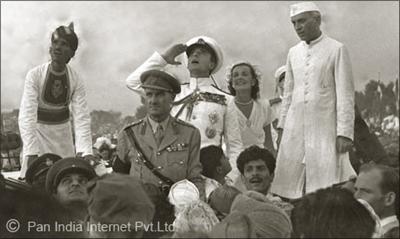 The East India Company of British was chartered in 1600 almost along with Dutch but soon realized that Dutch was unwilling to share trade benefits in East Indies.
In India Portuguese were already at a good trade relationship. Finally what won the east was that old trump card of the British, their naval supremacy.

The then Mughal Emperor Jehangir Received the first British ambassador Sir Thomas Roe in 1612. Under Roe’s effective communication a treaty was signed between the Mughals and British according to which British became their unspoken, unsaid, naval aide.
By 1674 Bombay came to the British as part of the dowry of Charles II's Portuguese queen Catherine, and from here they never looked back.

Adding to the British advantage was the gradual decline of Mughals after the death of Aurengzeb. Soon after the death of Aurengzeb, India was invaded by Afghans. During the time when British were slowly moving towards gaining powers in India, they had to deal with their long time enemies French.
Between 1746-48 the French and English finally came to blows in the first Carnatic War (1746-48) in the Deccan.
Rising above all major fights and battles British slowly captured entire India after the major battles like battle of Plassey that turned the trading power to a ruling power.

With growing profits and gaining power British soon wanted to have strong hands in the Administration of India. The British soon grew from being a trading company to a ruling endeavor after it won the Battle of Plassey. The Mughals gave Dastaks or permits to Britishers allowing the Britishers to collect taxes.
This when opposed by the ruler of Bengal led to the famous Battle of Plassey. The Battle of Plassey fought in 1757 was a decisive battle in establishing the rule of British in India. Siraj - ud – Daullah was the Nawab of Bengal at that time. Read More

After the Regulating Act of 1773 gave the British Government more parliamentary powers in Indian Administration to regulate the affairs of the Company in India, the second important step taken by the British Parliament was the appointment of a Board of Control under Pitt's India Bill of 1784.
It provided for a joint government of the Company (represented by the Directors), and the Crown (represented by the Board of Control).

A Board of six members constituting two members of the British Cabinet and four of the Privy Council was formed. The Board had all the powers and control over all the acts and operations, related to the civil, military, and revenues of the Company.

In 1786, a supplementary the Bill appointed Lord Cornwallis was as the first Governor-General, and he then became the effective ruler of British India under the authority of the Board of Control and the Court of Directors. The constitution set up by the Pitt's India Act did not undergo any major changes during the existence of the Company's rule in India.

After the establishment of the Pitt’s Act, that appointed Governor Generals as the representative of British Administration, Warren Hastings became the first British Governor General to rule India. Under his leadership, British rule expanded manifolds.  He was succeeded by Lord Cornwallis in the year 1784.

Lord Cornwallis introduced the Permanent Settlement wherein it was stated the British would collect land revenues from the Zamindars till eternity.
Under the administration of Lord Wellesley the kingdom of Mysore was annexed after fierce battle with Tipu Sultan and then eventually the state of Punjab was conquered. This annexation of Punjab led to the spread of British rule across India.

With time many acts and amendments passed by Britihers met with dissatisfaction and resentment by the Indians. As a result the Indians formed large groups and revolted against the British.
Leaders like Mahatma Gandhi, Jawaharlal Nehru, Lala Rajpat Rai, Subhash Chandra Bose, and many others arose and openly condemned the British. They were people's leaders who inspired the masses not to be afraid of the forces. Read More
18