Jallianwala Bagh massacre of April 13, 1919 was the most inhuman act of the British rulers in India. The people of Punjab gathered on the auspicious day of Baisakhi at Jalianwala Bagh, near Golden Temple at Amritsar, to lodge their protest peacefully against harassment by the British Indian Government. 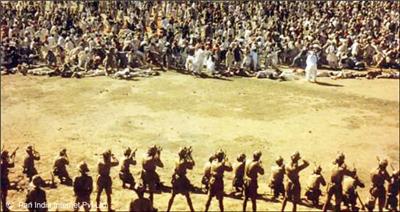 General Dyer came suddenly with an army of 90 British Indian Army soldiers and ordered to fire on all the people including women and children.

After the First World War (1914-1918), Mohandas Karamchand Gandhi became the undisputed leader of the Congress. During this struggle, Mahatma Gandhi had developed the novel technique of non-violent agitation, which he called 'Satyagraha', loosely translated as 'moral domination'.

Gandhi, himself a devout Hindu, also espoused a total moral philosophy of tolerance, brotherhood of all religions, non-violence (ahimsa) and of simple living. With this, new leaders like Jawaharlal Nehru and Subhash Chandra Bose also emerged on the scene and advocated the adoption of complete independence as the goal of the National Movement.

In front of Hunter Commission, Dyer admitted that he came to know about the meeting at the Jallianwala Bagh at 12:40 hours that day but took no steps to prevent it. He stated that he had gone to the Bagh with the deliberate intention of opening fire if he found a crowd assembled there.

In the storm of outrage that followed the release of the Hunter Report in 1920, Dyer was placed on the inactive list and his rank reverted to Colonel.
7997