The First War of Indian Independence started with the revolt of the military soldiers in 1857 at Meerut and posed challenge to the British rule. It was a popular revolt in which by and large the Indian rulers, the masses and the militia participated. 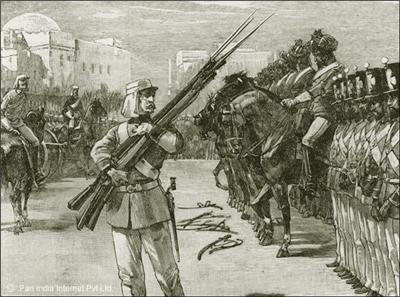 Introduction of zamindari system, insisting of the use of British manufactured goods, opposition of Indian religion and caste system and Indian soldiers as well as people in administration could not rise in hierarchy as the senior jobs were reserved for the Europeans; all aroused resentment among masses. This discontent and disgust against the British rule had grown when the sepoy were given new cartridges greased with cow and pig fat, whose covering had to be stripped out by biting with the mouth before using them in rifles. The Hindu as well as the Muslim soldiers, who refused to use such cartridges, were arrested This resulted in a revolt of 1857 by the 'sepoys' at Meerut whose religious sentiments were offended.
The Hindus, the Muslims, the Sikhs and all fought to outset the British from India. The revolt began from Meerut in May 1857 and ended in Gwalior in June 1858.

The rebel forces soon captured Delhi and the revolt spread to a wider area and there was uprising in almost all parts of the country. The most ferocious battles were fought in Delhi, Awadh, Rohilkhand, Bundelkhand, Allahabad, Agra, Meerut and western Bihar. The rebellious forces under the commands of Kanwar Singh in Bihar and Bakht Khan in Delhi gave a stunning blow to the British. In Kanpur, Nana Sahib was proclaimed as the Peshwa and the brave leader Tantya Tope led his troops. Rani Lakshmibai was proclaimed the ruler of Jhansi who led her troops in the heroic battles with the British.

Mangal Pandey, a soldier of the 34th Native Infantry in Barrackpore was the hero of the 1857 revolt. He attacked his British sergeant and wounded an adjutant, General Hearsay. Mangal Pandey was hanged on 7 April. The whole regiment was dismissed as a collective punishment. The 11th and 20th Cavalry assembled, they broke rank and turned on their commanding officers, liberated the 3rd Regiment, and the sepoys reached Delhi and were joined by other Indians. The Red Fort, was attacked and captured by the sepoys.

Soon, the revolt spread throughout northern India. Revolts broke out in places like Meerut, Jhansi, Kanpur, Lucknow and many other places. British moved European regiments towards India. The British fought the main army of the rebels near Delhi in Badl-ke-Serai and drove them back to Delhi. After a brief war spanning a week, the British retook the city. Rani Lakshmi Bai was killed in Gwalior in 1858.

The war of 1857 was a major turning point in the history of modern India. The British abolished the British East India Company and replaced it with direct rule under the British crown and a Viceroy was appointed to represent the Crown.

The British embarked on a program in India of reform and political restructuring, trying to integrate Indian higher castes and rulers into the government. They stopped land grabs, decreed religious tolerance and admitted Indians into the civil service. The Governor General was given title of Viceroy. They also increased the number of British soldiers in relation to native ones and allowed only British soldiers to handle artillery. Queen Victoria assumed the title of the Empress of India and thus gave the British Government unlimited powers to intervene in the internal affair of the Indian states.  In 1877, Queen Victoria took the title of Empress of India.'

The rule of East India Company ended as a consequence to the failure of the Revolt of 1857 and many important changes took place in the British Government's policy towards India.

The British provided their support to the loyal princes, zamindar and local chiefs but neglected the educated people and the common masses. They promoted the interests of the British merchants, industrialists, planters and civil servants. The people of India did not play any role in running the government or formulation of its policies. Indian National Movement rose as a consequence of people’s growing discontent.
9565