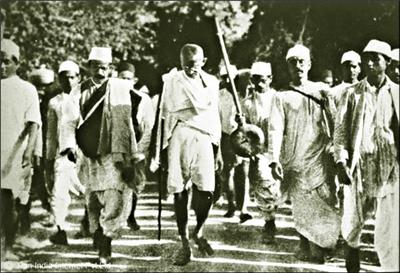 Non-cooperation Movement is officially considered as the first movement for Independence in India. The Movement was started in 1920. This non violent protest in the entire nation was started by Mahatma Gandhi.

This movement officially started the Gandhian era in India. This freedom struggle made the Indians aware about the fact that British government can be opposed if the opposition is carried out actively and that will keep a check on them.

The Non-Cooperation Movement continued till 1922. Thus, educational institutions and foreign goods were boycotted. Though the movement failed, Indians awakened to the concept of going against the British.

The crowd of 2000 protestors marched towards the local market of Chauri Chaura (a town near Gorakhpur, Uttar Pradesh) on and started shouting anti-government slogans on February 4, 1922. Armed policemen were sent to the city police station to control the situation.

The crowd started throwing stones at the armed policemen. Sub inspector ordered the policemen to start firing on the crowd to control the situation. Three protesters were killed on the spot and several others were injured. The crowd became extremely violent by this and attacked the police from all the sides. Twenty-two policemen were burnt alive, including the station sub inspector.

The British government was furious after this incident and imposed martial law in the city of Chauri Chaura and surrounding areas.

The British Government sent Simon Commission to India in 1927 to study the constitutional reform and suggest further reforms in the structure of Indian Government. The commission was formed with Sir John Simon as its Chairman. The commission consisted of a group of seven Britishers and no Indian was included.

It sparked a wave of protests all over the country. The Muslim League, led by Muhammad Ali Jinnah and the Congress under the leadership of Lala Lajpat Rai boycotted it. The crowds were lathi charged and Lala Lajpat Rai died of the blows of the lathi.
7668