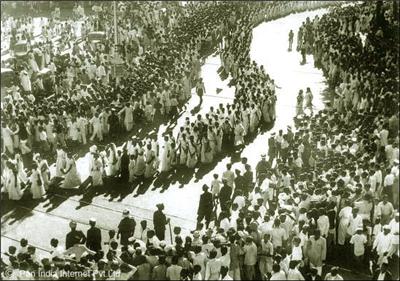 Quit India Movement is also known as Bharat Chhodo Andolan or the August Movement. The Quit India Movement was launched under the leadership of Mahatma Gandhi in August 1942. Entire India came together for freeing India from the shackles of British. This movement was to bring the British to negotiate with the Indian leaders.

It was a call for immediate independence of India and the slogan of "Do or Die" was adopted. The leaders were arrested and were put behind bars by British officials. Gandhiji fasted for 21 days demanding the release of the leaders.

After the Quit India Movement the freedom struggle got more intense and passionate. People raised voice for Purna Swaraj or complete independence. After much sacrifices and efforts, India gained independence and unfurled its flag on the 15th August, 1947.

Indian National Army also known as Azad Hind Fauj was formed in 1942. The army was aimed at to overthrow the British Raj in colonial India, with Japanese assistance.

Subhash Chandra Bose gave the statement- "Give me blood and I shall give you freedom" which called the people of India to join him in his freedom movement.
15135