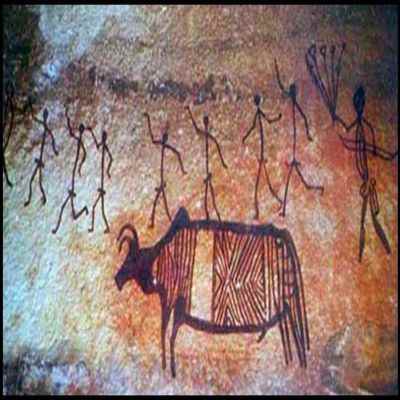 The Mesolithic Era in the Indian history was a period between Paleolithic Era and Neolithic Era. The period is also referred as Middle Stone Age. The Mesolithic Age lasted from 8000 B.C - 4000 B.C and marked the development of human technology. Humans began to live in groups and started switching towards the sedentary life style.

The increase in the group size created the need of more food for the survival of all members of the family, this lead to improvements of the tools and weapons. Tools were further sharpened and also given different shapes and sizes for different purposes.

Specialized stone weapons were made by tying sharp and pointed stone tools to the twig of the tree using the ropes (made by the skin of animals). These specialized new weapons also called hand axes aided in the hunting could be lobbed on running animals from a short distance.

The Mesolithic Era also brought modifications in the clothing and food style of then times. People started wearing clothes made of animal’s skin as well eating cooked food by using fire.
Primitive people were also fond of art and paintings as depicted by the popular cave paintings present at Bhimbetka in Madhya Pradesh. Some of the important Mesolithic sites in India are Chotanagpur Plateau in Central India and regions around the banks of River Krishna.

The major contribution of the late Mesolithic Era was the invention of the farming which resulted into the shift of habitat hilly and forest areas to alluvial fertile plains, suitable for farming.
Another major difference between Paleolithic and Mesolithic age was the shift from hunting of big animals to small animals. It was during this time that the use of bow and arrow was also begun.
6168