The Nawab of Bengal released a Farman in 1717 stating that the goods for sale locally as well as abroad should be free of duties. Mirqasim took measures to stop the illegal selling of free trading passes (dastaks) to the Indian businessmen.

The Zamindars were forced to pay gift or bribes to the East India Company officials. Mirqasim tried to put a check to this. The English merchants were not ready to accept the Indian merchants equal to themselves. Both English and Mirquasim wanted to be the masters of Bengal. The conflict initiated with a clash between an English Chief and a Nawab. 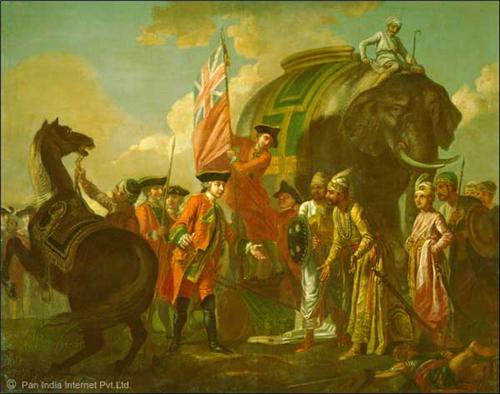 The Battle of Buxar was fought in 1764 between the British East India Company led by Hector Munro and the armies of Mirquasim, Emperor Shah Alam II and Shuja-ud-daula, Nawab of Avadh in Buxar (in Bihar). The battle gave rise to British rule in Bengal.

Awadh was merged with the company after the battle of Buxar and thus British rule spread in Bengal.
Nawab of Bengal signed a treaty with the company saying that he would dissolve most of his army and Bengal would be administered through a deputy Subahdar.

The East India Company gained control over the Nizamat of Bengal and got the right to Diwani, by which they collected the revenue from Bengal, Bihar and Orissa. As the Diwan, Company was able to collect taxes and also gained administrative power.
24475