Battle of Plassey is the most critical war mentioned in the dark pages of Indian history, as this war turned the country into the slave under the British rule for about long period of two centuries.

The Battle of Plassey took place on June 23, 1757 at Palashi village of Murshidabad, on the bank of Bhagirathi River between British East India Company and Nawab of Bengal and his French allies.
Murshidabad, which is about 150 km north of Calcutta, was then capital of Bengal. It was fought between the British Army and the Nawab along with his French Allies.
Nawab Siraj Ud Daulah, the last Nawab of Bengal, fought the battle to survive as independent ruler from the British rule and was supported by French East India Company. 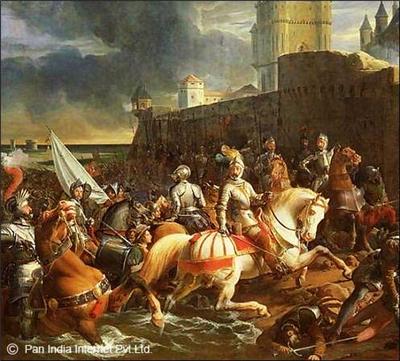 The forces of the East India Company under the commander ship of Robert Clive defeated the army of Nawab from Bengal.
The battle was actually a programmed one as Mir Jafar, the army commander of Nawab along with the large number of soldiers from the Nawab’s army were convinced and bribed by East India Company.
This resulted into the defeat of Nawabs and the major ladder for the ascendancy of British rule in India.
The East India Company flourished by winning the battle and strengthened its military by gaining treasure of Bengal and later captured most of the parts of South Asia.
The army commander Mirzafar of Siraj Ud Daulah`s side betrayed in the battle of Plassey and thereby the whole force of Nawab collapsed and as a consequence, the entire province of Bengal came under British. The East India Company further monopolized trade in Bengal.
In order to spread their control across India, Britishers annexed many princely states and forced their own laws to be implemented. This led Britishers to control over entire India slowly and steadily.
By mid 19C, the British introduced the railways, telegraph and postal service in India. The first railway line was from Howrah in Calcutta to Raniganj in Bihar. The introduction of telegraph and postal services simplified communication all over the country.
33892