To extend the boundaries of his empire Muhammad Shahabuddin Ghori entered into India in 1175 CE. He advanced to Gujarat in 1178 CE and advanced further by seizing Peshawar and Lahore and he ended the rule of Ghaznavids in Panjab with the help of the ruler of Jammu. 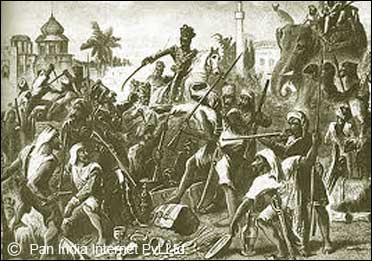 As a result of successive conquests the boundaries of Ghori’s kingdom extended to the border of Prithviraj's kingdom. In 1191, Muhammad Ghori attacked Sirhind or Bathinda on northwestern frontier of Chauhan kingdom.
Prithviraj's along with his army, led by vassal Govinda-Raj, rushed to the defense of the frontier, and the two armies fought a battle at Tarain.
This is how the First war of Tairan began.

Two wings of Turkic army was defeated and fled away while Muhammad Ghori could not recover from the blow and fainted from the shock.
The army surrendered and Muhammad was made prisoner. Muhammad of Ghor begged for mercy and Prithviraj pardoned him.

Muhammad Ghori decieved Prithviraj with a letter of acceptance of the treaty. The Rajput army 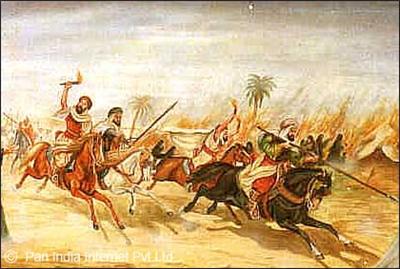 was in a relaxed mood. Suddenly Ghori`s army attacked Prithviraj`s army in the wee hours. At the end of the day Muhammad Ghori was victorious.

About hundred thousand Rajput soldiers died in the battle. The second battle of Tarain opened the way for conquerors of India.
Muhammad and his successors established an Islamic Empire in India as the Sultanate of Delhi.
62453