Alappuzha Beach has an old pier that extends to the sea that is over 150 years old. This beach is famous for hosting many events annually like the Alappuzha beach festival, Sand art festival, and many more. 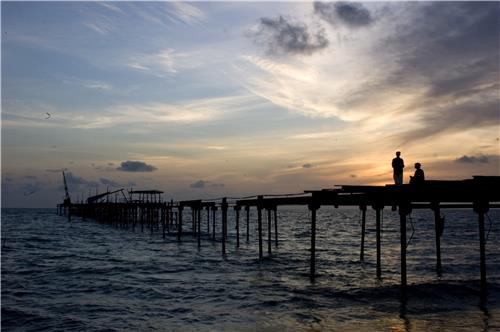 Alappuzha, famous for its boat races, beaches, marine products, and coir industry, is a world-renowned backwater tourist destination in India.
Once upon a time, you could walk on the old sea bridge and enjoy a 360-degree view of the mesmerizing Arabian Sea, standing over the sea itself.

The Alappuzha town and beach speak of a rich historical legacy. This beach plays an important part in the maritime routine of Kerala. The famous Alappuzha Lighthouse was built by Captain Hugh Crawford in 1862. The lighthouse takes the visitors back to Kerala’s Colonial past.

A major highlight of the boat racing culture of the beach is the annual Nehru Trophy Boat Race which began in 1952 on the occasion of the visit of India's first Prime Minister, Jawaharlal Nehru Alappuzha.
Since then, every second Saturday of August is celebrated as the Nehru Trophy Race in which one can see the best snake boats of Kerala, preparing to outdo each other.

The Vijaya Beach Park is a small park located close to the shore, and it forms a perfect setting for kids to enjoy themselves in nature’s bounty of lush greenery. Also Read: Vijaya Beach Park.

The contemporary boating culture derives from the old tradition of “Kettuvallams” or rice barges of colonial times.
They were originally used to transport bags of rice and the famous Kerala spices from the port of Alappuzha. Currently, however, going for a boat cruise is a purely recreational activity.

How to reach Alappuzha Beach