Kovalam in Malayalam means “a grove of coconut trees.” The beaches are famous for being the most pristine in India. Kovalam is extremely popular among Westerners because of its shallowness.
This beach is one of the oldest tourist enclaves in India and was known among the tourist circuit right in the 1930s.
The beach is divided into three beaches separated by rocky outcroppings in its 17 km coastline, the three together form the famous crescent. 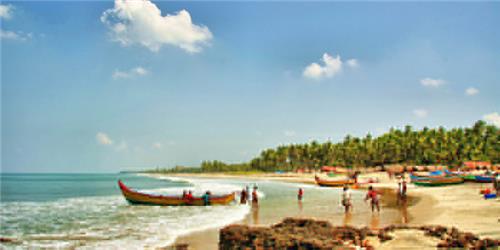 1920s when Maharani Sethu Lakshmi Bayi of Travancore. They built her seaside residence, Halcyon Castle. Gradually, Kovalam became popular with European visitors to the court of Travancore and later with hippy travelers in the 1960s and 70s.
Tourists from all over India made a beeline for it in the 1980s and 90s, giving it the tag of Kerala’s most popular resort. The sands of Kovalam are a darker presence in minerals such as ilmenite and monazite.
Lighthouse Beach gets its name from the old Vizhinjam lighthouse pot. E eve’s Beach is a tranquil bay, especially during moonlit nights. Another beach in the northern extremity of Kovalam, Ashoka Beach, is still untouched by tourism. Vizhinjam, 3 km away from Kovalam, is a port and fishing village. It boasts a state-of-the-art harbor and has a plant that converts wave energy into electricity.
Vizhinjam was once the capital of the Ay Dynasty and is today known for its cave temples, church, and mosque. Archaeological remains here point to the area’s once-flourishing trade with the Roman empire.
Location: 16 km from Thiruvananthapuram.

How to get there: Thiruvananthapuram has the closest airport and railway station. Autos and taxis are available in Kovalam. Day-trippers can also take a bus from the city.