When you are traveling around India, there are a lot of attractions to see. This mystic land receives and entertains a multitude of visitors every year.
In proximity to some famous tourists attractions in major cities, one can come across some good heritage hotels offering both business and leisure services of international standards.
With top-notch facilities and first-rate services, guests can enjoy an unforgettable holiday amidst luxury. Discover such the best balance at some of the famous luxury heritage hotels of India.

Usha Kiran is a beautiful palace set amidst a picturesque landscape of Gwalior. The palace is 120 years old royal one that played proud hosts to several national and international high-profile personalities including none other than the King of England.
The palace is a beautiful architectural marvel boasting some of the most intricate artistic works both inside and outside. The Usha Kiran Palace is now overtaken by the Taj group.
Address: Jayendraganj, Lashkar, Gwalior, Madhya Pradesh 474009
Phone: 0751 244 4000 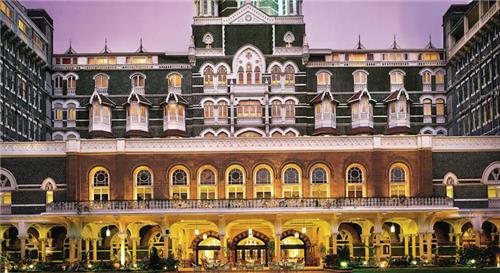 Located just behind the idyllic Gateway of India, the Taj Mahal Palace is undeniably one of the most iconic landmarks of Mumbai. This hotel has been the proud host of several high-profile national and international guests since its inception in 1903.

The hotel is a part of the Taj Hotels, Resorts, and Palaces and is one of the most important flagship properties of the Taj Group.

When Jamsedji Tata was denied any access to the classy Watson’s Hotel as it was open to the ‘whites only’, he decided to set up a hotel with equal measures and thus this great palace hotel came up in existence.

Known as the 'Grand Dame of Kolkata', the Oberoi Grand is not only the pride of the city of joy, it is also one of the finest heritage hotels in India.
Situated at a prime location at the heart of the city at Jawaharlal Nehru Road (previously known as Chowringhee Road) and surrounded by the beautiful Victoria Memorial, iconic landmarks of Kolkata.
This hotel has been offering the most luxurious and royal treatment to its visitors since the British imperial era. This hotel is still preferred choice for any national, state-level or the International affairs taking place in Kolkata.
Address: 15 Jawaharlal Nehru Road, Kolkata 700013, India
Email: reservations@oberoigroup.com
Phone : +91 33 2249 2323,
https://www.oberoihotels.com/hotels-in-kolkata/
Also Read
Tourism in India
190