22 Most Mesmerizing Waterfalls in India

22 Most Mesmerizing Waterfalls in India

India is blessed with some of the most spectacular natural wealth. At every nook and corner there is something wonderful natural presentation lying, calling you to behold and experience the nature in most intimate way.
From the mighty Himalayas to the vast oceans, from the desert-dunes to the raging rivers, there is no dearth in natural wonders in this country.

Among such huge range of natural features, mountains and hills have occupied the major parts of the country. And where there is a mountain, there must be waterfalls as well.

India boasts some of the most fascinatingly beautiful waterfalls in the subcontinent, check them out here: 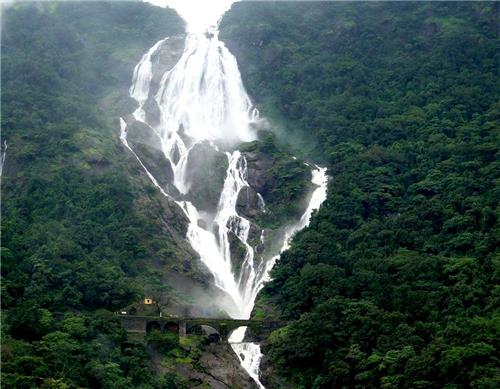 Located at Mollem, at the border of Goa and Karnataka, Dudhsagar is one of the highest waterfalls in India and the most fascinating one as well.
Dudhsagar which means the ‘Sea of Milk’ plummets on the rock base from a height of 310 meters forming a raging water flow which resembles nothing but the thick stream of milky colored water.

With additional features of the surrounding dense forests and the stupendous hills of the Western Ghats, Dudhsagar become most mesmerizing post monsoon.
Though the slopes and the rock layers are dangerously slippery, the falls is also one of the most popular rock-climbing and trekking destinations in India. 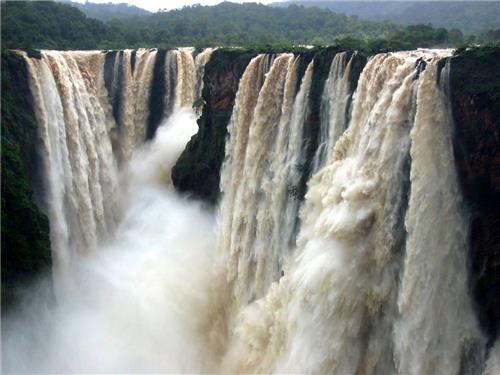 Karnataka is a state blessed with several wonderful waterfalls. Jog is not just the pride of the state; it is indeed India’s most famous and one of the most mesmerizing waterfalls.
This is also the second highest plunge falls in the country with an astonishing height of 830 ft. The best time to experience the roaring of the nature in during the monsoon season. Read More 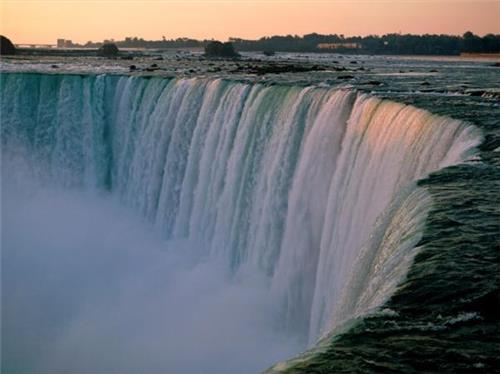 Chitrakoot, the Niagra Falls of India is one of the most awe-inspiring waters falls in India. Chitrakoot is located on the River Indravati near Jabalpur city in Chattisgarh.
This is probably the broadest waterfalls in India which turns absolutely fierce yet spellbinding during monsoon. The sight of the massive water constantly plunging upon the mighty Vindhya and watering the lush green forests around the fall would simply jaw-dropping. Read More 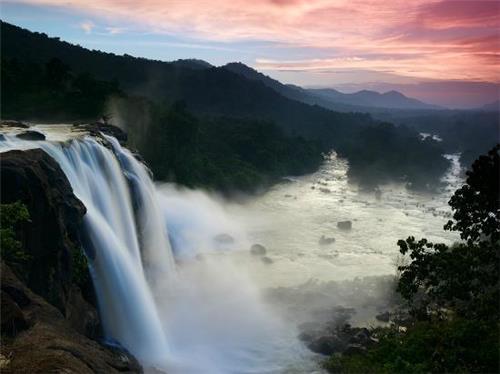 These two mesmeric falls lay just five kilometers away from each other at Chalakudy, Kerala. While Vazhachal falls is an intrinsic part of the Chalakudy River, the Athirappilly Falls joins the river after plumping down on the rocky terrain from 80 feet above.
The dense forest at the backdrop of both the falls and their brumous water plummeting down on the terrain makes a hypnotizing sight for the beholders. 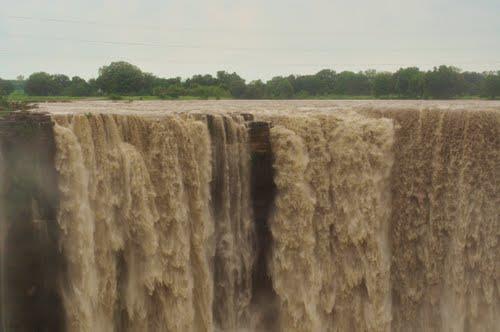 Chachai is a breathtaking waterfall located at the Rewa district of the state of Madhya Pradesh. This is India’s 23rd highest waterfall with the height of whopping 130 meters.
Chachai fall is a part of Bihaad River. Chachai is a perfect example of what is called a knick point. Geographically a knick or a nickpoint is an abrupt change in the gradient and the slopes of a waterfall.
These changes cause the vertical descent of water making a huge cascade of raging water. This unique feature makes Chachai a exceptionally delightful experience. Like all other falls, the most suitable time to visit Chachai is during or post monsoon. 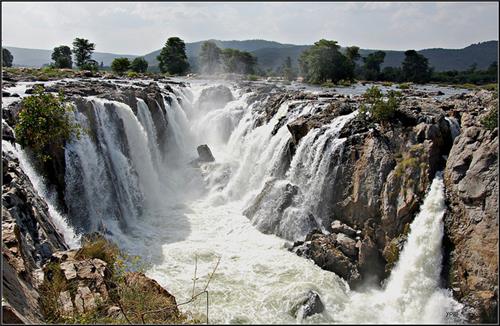 The Niagara of South India, Hogenakkal Falls is one of the most awe-inspiring waterfalls located in Tamil Nadu. The fall lies on the Kaveri (Cauvery) River.
The word Hogenakkal comes from the Kannada language where Hoge means smoke and Kal means rock.  The bunch of water plummets on the rock in such a force from around 65 ft height that it creates a layer of fine mists which resembles smoke emanating from the rock.  Read More 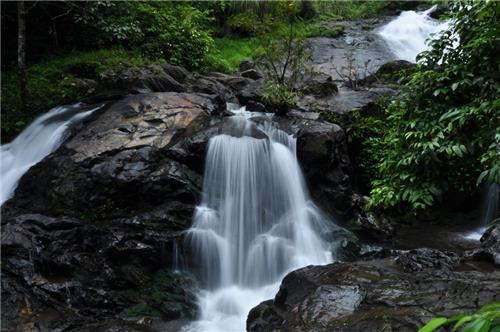 Wrapped in sacred belief Iruppu Falls is one of the most enchanting waterfalls and a major attraction in Karnataka. The path on which the water takes its course to the river is full of natural delights.
Located on the Brahmagiri mountain range in southern Coorg and descends into the River Laxmana Tirtha after falling from a whopping height of 60 meters. 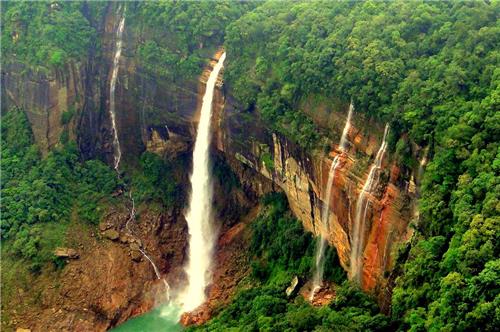 The tallest and the fifth largest waterfall in India with the humongous height of 1099 ft (335 mt), Nohkalikai is truly a nature-lover’s paradise.
Situated near Cherrapunji, one of the wettest places in India, Nohkalikai becomes most beautiful between the months of May and September. Read More

Vantawng Falls are located at 137 km away from Aizawl, the capital city of Mizoram and is another astounding waterfall in India. This is so far considered the most amazing fall of Mizoram.
Situated on the Vanva River, Vantawng Khawhthla or the Vantawng Fall is named after an excellent swimmer, Vantawng who sadly died while his swimming performances in the cascading water when a floating log fell on him. Vantawng is a massive 750 ft high fall and surrounded by think forests and a dangerous hilly range. 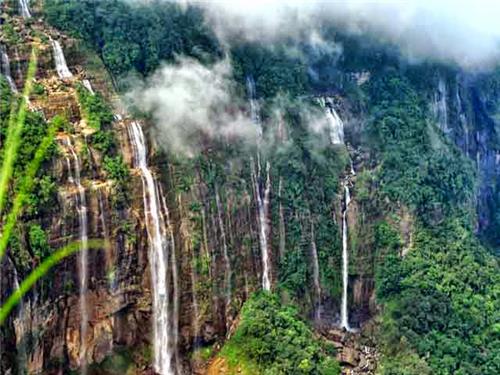 Popularly known as the Seven Sisters Waterfalls and Mawsmai Falls, Nohsngithiang is one of the most hypnotizing falls in India. Located in the Eastern Khasi Hills district in Meghalaya is the fourth highest waterfalls in the country.
Though the fall flows only during the monsoon, Nohsngithiang plummets from a thumping height of 1033 ft on the cliffs of the Khasi Hills and thus creates some astonishing views. 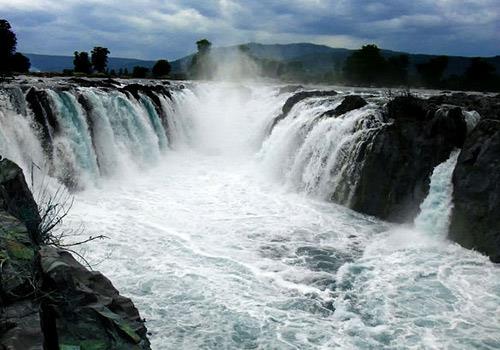 Nuranang which is also known as Jang and Bong Bong Falls is another stupefying waterfall in India. Located at a distance of 40 km from Tawang, Arunachal Pradesh, Nuranang originates from the famous Sela Pass and after flowing through a rocky terrain it meets Tawang River.
Nuranang Falls was named after a local Monpa girl, Nura who courageously helped an Indian soldier during the Sino-Indian war in 1962. Read More 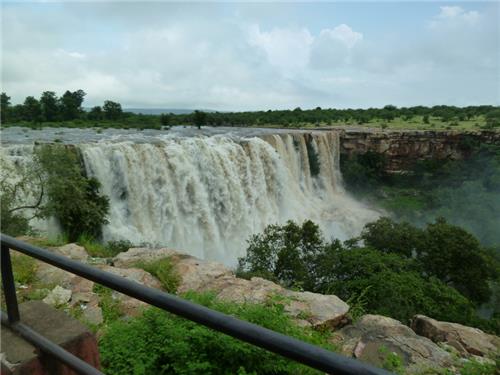 True, that nature has bestowed Rajasthan with a unique climate. If a large part of the state is dried up and is in crying need for some drops of water, there are places in Rajasthan, where many beautiful water-bodies quenching the thirst of Mother Nature. Bhimlat Falls is a perfect example of Rajasthan’s unique climatic features.

Each monsoon, the Hadaoti region of the state becomes a beautiful lush green area. Bundi is a historically famous place in this region which is a wet place among many other parched parts of Rajasthan.
The hilly terrain of Bundi has its natural gem kept almost a secret from many curious visitors. Hence, notwithstanding the fact that it is so stunning, Bhimlat is not a popular one keeping the beauty quite unspoiled. This 60 mt high roaring waterfall is certainly one of the most mesmerizing falls in India. 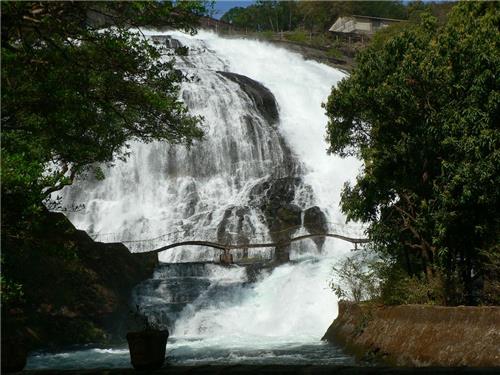 Another piece of beauty, Kune Falls is a crown-jewel of Maharashtra. Located at the evergreen Lonavala - Khandala region, Kune is a three-tired 200 mt high fall anked 14th tallest waterfall in India.
The whole region gets wondrous during monsoon so does the fall. The water flowing from a high distance with sheer furious force and melting amidst the green valley is a sight that no one should afford to miss. 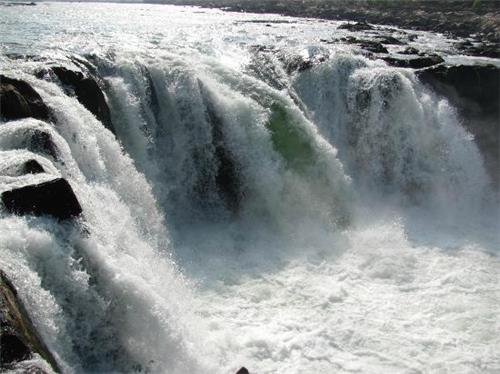 Jabalpur, Madhya Pradesh has several beautiful waterfalls. Dhuandhar Falls or Dhuandhar Jalprapat on the sacred River Narmada is another natural marvel that never fails to make us wonder with its sensational beauty.
The water flows through the famous marble rock gorge in Bhedaghat. Raging water falling down on the rocks creating a smoke-like vision is one of the most mesmerizing views of a waterfall. The roaring of Dhuandhar could be heard from a great distance especially during the monsoon. 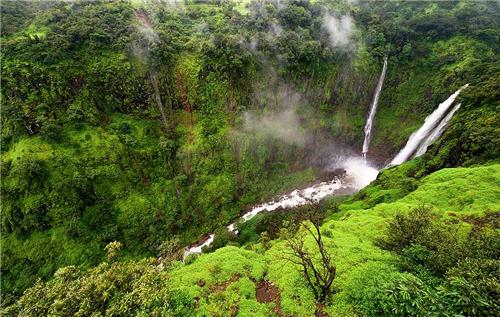 Around 20 km away from Sitara town in Maharashtra, there flows another beautiful waterfall, Thosegharh located in a deep gorge at Thosegharh village.
Thosegharh is an ensemble of several falls ranging from small (15 mts) to large (500 mts). Though these falls keep flowing throughout the year, but monsoon is the best time to experience the fury of nature in most intimate way. 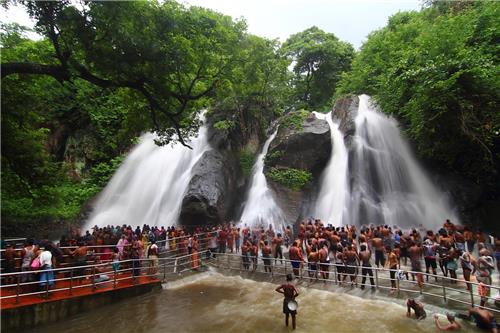 Courtallam, the spa of South India is the largest waterfall of Tamil Nadu. Courtallam is situated on the Western Ghat at Thirunelaveli District of the state. Several perennial and seasonal river flowing down this region gave birth to these falls.
Courtallam Falls become immensely powerful only during the monsoon or if there is good amount of rain. The hillocks, green forest and a famous mountain called Agasthiarmalai make the surroundings look of Courtallam so gorgeous.  Read More 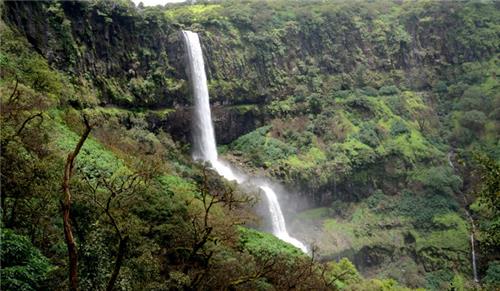 The most amazing waterfall in Maharashtra, Vajrai Falls is the newest inclusion among the list of India’s topmost highest waterfalls.
This gorgeous fall is located near the Sahyadri Hill and the beautiful valley of Kas Plateau in Satara. Vajrai become a delight for eyes when the rain drenches the state heavily during the monsoon. It descends from a massive 1840 ft.

Karnataka, one of the most naturally-wealthy states in India has another gem for the nature-lover’s delight! The spectacular Shivasamundram Waterfall is situated on the split part of the Cauvery River flowing down from the mighty Western Ghats.
The multiple tiers of Shivasamundran raging through the lush green mountain make a sensorial experience for the onlookers. 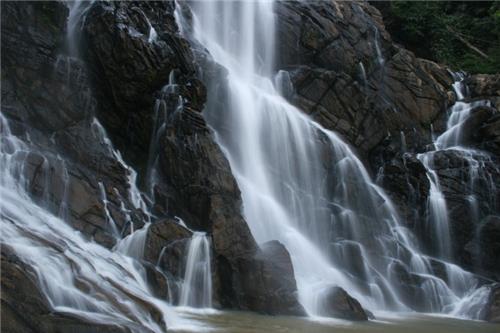 Surrounded by the dense forest, Meenmutty is a three-tiered fall with bewitching beauty. The waterfall is located at Wayanad, Kerala. Both the length (300 mt) and the volume of the ramping water are very impressive.
Meenmutty literally means a ‘fishing trap’ in Malayalam which completely justifies with the fact that the downstream of this attractive falls is an ideal fishing place. Read More 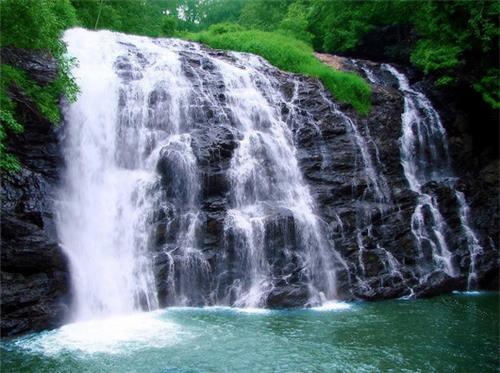 Abbey or Abbi is one of the most fascinating waterfalls those have been decorating the Western Ghats for ages. This piece of beauty is a 70 ft long fall located around 7 km away from the Town of Madikeri.
During the monsoon, like all other falls Abbey makes a wonderful sight filled with white misty clouds enshrouding the surrounding greenery and hills.

After a long raging journey, Abbey finally meets the Cauvery River. The location of the fall is another reason for it to look so stunning. 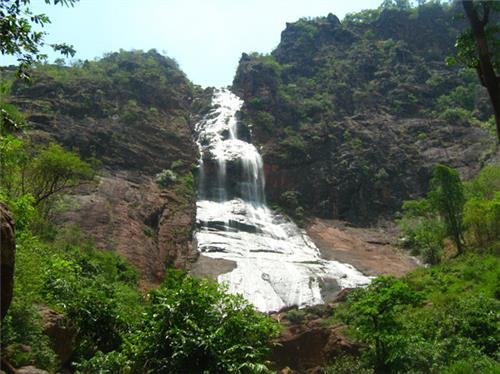 These 244 meter high falls at Sundagarh district, Odisha are among those fewer known waterfalls in India boasting with some of the most mesmerizing beauties. Khandadhar Falls are the 12th tallest falls in India and are the most stunning horsetail-type falls in the country.
Khandadhar takes birth on the enchanting Korapani River. These massive falls become monstrous in volume during monsoon but are completely visible and audible from the distance as far as 10 km throughout the year! 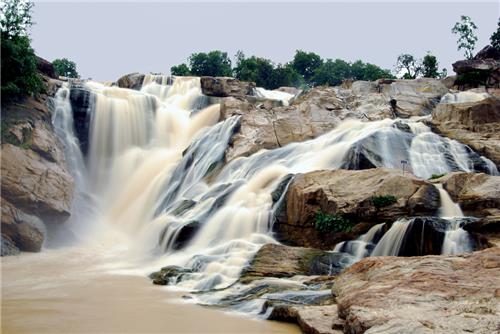 Like many other states, Jharkhand is also blessed with numerous beautiful waterfalls. Dassam is comparatively a shorter one among many other falls in the state, but the visual aspects of it is something worth mentioning.
These 44 meter high falls have a bad reputation for being notorious, but accidents mostly happen due to the human-recklessness.
11406