Must Visit Religious Spots in India Before You Turn 30

Must Visit Religious Spots in India Before You Turn 30

There are many ancient shrines and religious places in India which one must visit to imbibe the spiritual vibrations of the place, have a firsthand experience and get a feel of the religious fervour that devotees exhibit. A few of these popular religious places include Vaishnodevi Shrine in Jammu, Kumbh Mela in Allahabad, Siddhivinayak Temple in Mumbai etc. Thousands of devotees throng to these places every year. 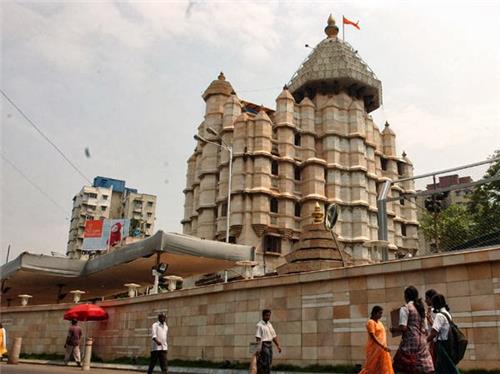 Here are a few religious places which you must visit before turning 30! Well, it is a good idea to imbibe a bit of magic of spirituality from these places and embark on your professional journey or a happy married life!

Let us bring in more life in our living and share the enthusiasm of these devotees. Here are a few places which you must visit before you turn 30! 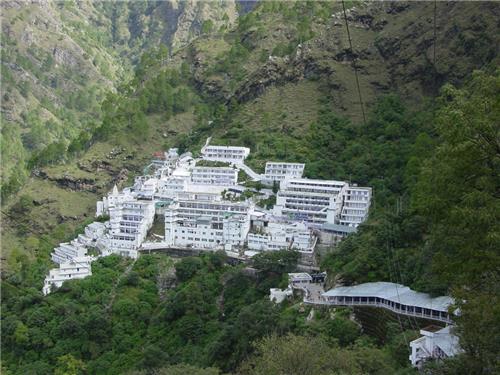 This temple in Jammu is located on the hills of Katra and is dedicated to Goddess Adi Shakti (Goddess Durga). Also popular as Mata Rani, the temple is situated at an altitude of 5,300 feet!You will have to prepare yourself for an arduous trek to reach the caves at the top of the Trikuta hills. 'Jai Mata di' reverberates in the air while devotees enthuse each other to walk the entire stretch and have 'darshan' of the idol of Goddess to seek her blessings.

The way up to the temple shrine is quite an arduous journey. Though you will enjoy every bit of this spiritual journey - making your way into a tunnel, climbing hundreds of steps or hiring a pony, you need lot of vigor and vitality. If you have not visited this shrine, visit it before you turn 30! 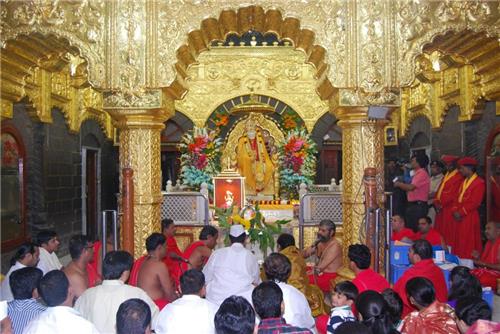 The Sai Baba temple is situated in Shirdi (Maharashtra). It is actually the samadhi of Sai Baba and is equally revered and visited by people belonging to different religions.

Sai Baba was an Indian Spiritual master - a fakir and satguru, who was revered by both Hindus and Muslims. He taught his devotees simple facets of a happy life such as forgiveness, love, inner peace, truth, charity, contentment and his main concern was self-realization. He always said 'Allah Malik' and the mosque where he resided was named as Dwarkamayi. No one knows whether he was himself a Hindu or a Muslim and his teachings are inspired from both these religions.

People belonging to all religions worship Sai Baba. It is promise to his devotees from Him that He will certainly make their wishes come true. If you have faith as small as a mustard seed, you can move mountains. So, what are you waiting for? Start your business or job after seeking blessings of Sai Baba in Shirdi!

The temple of Tirumala Venkateswara is dedicated to Lord Vishnu. This is considered as the richest pilgrimage centre in India. The main festival celebrated here is the Brahmotsavam festival when pilgrims from all around the world visit here. The temple is situated on the last hill of Seshachalam Range in Tirupati (Andhra Pradesh). The exquisite architecture of the temple is worth witnessing. Around 60,000 devotees visit the temple everyday!

Everyone knows him as the richest God! Well, people come back again next year to offer their hair if their wishes are fulfilled. This is one religious place you must visit before or after you get married, have children or just for more wealth and health in your life. 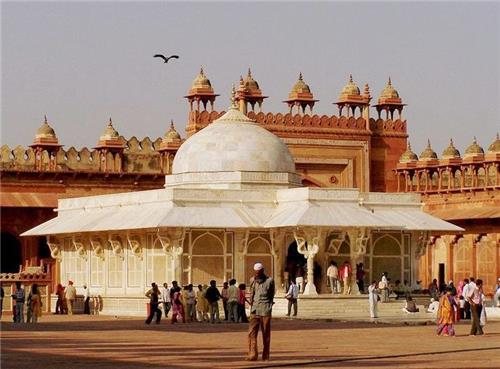 The dargah at Ajmer attracts devotees from various sections of society, irrespective of caste, creed or religion. Not only Muslims, but Hindus and Sikhs too visit this dargah --- a significant religious destination in India.This is the dargah of  Khwaja Moinuddin Chisti who is believed to fulfill wishes of those who come here. The best time to visit this dargah is during Urs festival which is an annual festival held here and attracts thousands of believers from all over.

Actor Shahrukh Khan is said to have visited this dargah and months later became a superstar! You must have read in the news too about Bollywood stars visiting this dargah before the release of their films. Well, come here and seek blessings. There are many, many stories about people getting married, bearing children, getting well and yes, richer in terms of wealth after coming and praying in this dargah. Make a trip to Ajmer before you turn 30 and experience success and happiness in your life!

This temple is situated in Bihar and is the place where Buddha attained enlightenment! There is a holy Bodhi tree in the temple premises along with Bodhimanda Vihara monastery. Emperor Asoka marked this significant site with an inscribed pillar with an elephant capital. The Mahabodhi Society was founded in 1891 and the 1949 Bodhgaya Act recognized this site as a Buddhist holy site. Mahabodhi temple was declared as World Heritage site in 2002 and its administration is overseen by Bodhgaya Temple Management Committee.

This is one of the ancient Buddhist temple built using brick! Outside the temple, there are scenes on the bricks depicting life of Buddha. The courtyard consists of statues and stupas. Just next to the temple is the Bodhi tree where Buddha attained enlightenment.

Do you know that in Sarnath, there is a Bodhi tree which was planted by Anagarika Dharmapala. Located next to a Sri Lankan monastery, this Bodhi tree was actually grown from a cutting of Bodhi tree at Bodh Gaya!

This is one religious site that will introduce you to tranquility and peace in your life. Just like Buddha, you will understand that you can be in peace even while standing amidst chaos! The peace lies within you and this is where you have to find it - inside you! If you visit this temple in Gaya before you turn 30, you will lead the rest of your life the right way. So, why wait till tomorrow? Make a trip to Gaya and learn the art of living life! 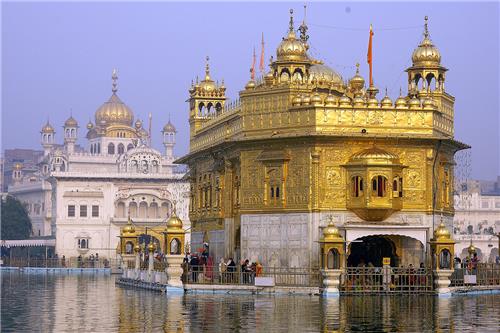 Also famous as Harminder Sahib (or Hari Mandir), this beautiful Gurudwara in Amritsar city (Punjab), is a holy place for the Sikh community. Golden temple was officially renamed as Harmandir Sahib in March 2005. However, people belonging to other religions too visit here. The temple is plated with real gold and is surrounded by a lake on all sides. The Gurudwara comprises of four doors in the four directions and reverberates with celebrations and festivity during Vaishaki celebrations. The Golden temple was built by the fourth Guru --- Gurudass Sahibji. This is the most significant Sikh pilgrimage centre in India.

Construction of Golden temple began in 1574 and was completed in 1601. The land was donated by Mughal Emperor Akbar. The gold and marble work took place under the patronage of Maharaja Ranjit Singh. The visitors are not allowed to smoke, drink or eat meat in the shrine premises. They also have to cover their heads with a cloth piece as a mark of respect for the guru Granth Sahib.

The Hari Mandir is also known as Darbar Sahib (Court of the Lord). Sacred pool around the temple Gurudwara is called Amrit Sarovar (Pool of Nectar). The dining hall (Guru-ka-langar) caters to 35,000 people every day where anyone can join in for having a meal regardless of caste, creed or religion. The Central Museum displays images of Sikh Gurus, saints and warriors. Palki Sahib is a ceremony carried out every night when Guru Granth Sahib is carried in a procession to 'bed'.

Golden temple is one religious place where people from any caste and religion can visit. Their doors are always  open to receive you, feed you and help you. Visit the beautiful Golden temple before you turn 30 and learn the beauty about 'Giving'. You will understand what joy lies in giving and sharing with people. Businessmen donate large sums of money as well as produce from their farms which is used to feed thousands of people who come here - free of charge and filled with love! You can also visit Jalianwala Bagh and other spots around this religious site in Amritsar.

The Lord Jagannath temple is situated in Puri, Orissa and dedicated to Lord Jagannath. During the month of June, the Rath Yatra attracts thousands of devotees from nearly all parts of the globe! The main deities of this temple are Lord Jagannath, Balabhadra and Goddess Subhadra.

The temple and the lovely beaches are calling you to Puri! Enjoy making sand art on the beach, go for a tan along with a spiritual experience you will find amazing! People vouch for prasad from this temple and even order for it through courier! Reach here before you turn 30 as then you can make your way through the very crowded 'Rath Yatra' too!

This is considered as one of the holiest shrines in India and is dedicated to Lord Shiva. The shrine is located at an altitude of 12,756 feet and looks mesmerizing with snowy mountains on all sides. You can reach the cave only after a rigorous trekking expedition. Every year an ice lingam is formed here - all on its own! Every year, during the month of Shravan, an ice stalagmite lingam is formed here naturally inside the cave owing to freezing of water.

According to a legend, Lord Shiva revealed the secret of immortality to his consort Goddess Parvati. This was heard by a pair of pigeons. Even today, people believe, that a pair of pigeons can be seen in the cave!

Amarnath Yatra is an amazing spiritual experience. You will understand the miracles that keep happening in nature and will learn to actually become more aware of these miracles all around us - all the time! The cave beckons you to witness the natural 'linga' and seek Lord's blessings at his abode! 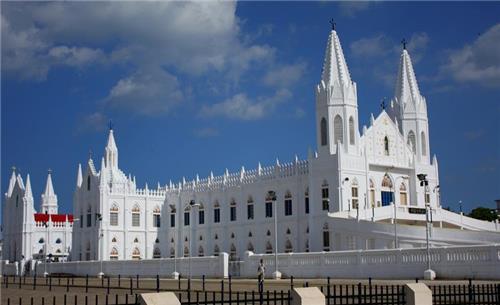 Velankanni Church is located in Nagapattinam district of Tamil Nadu. It is built on the lines of Gothic style of architecture. The church is also known as 'Basilica of Our Lady of Good Health'. It was built by a Portuguese sailor who survived a violent storm in the sea. He built this church to bestow his gratitude to the Supreme power. The most important festivals celebrated here are Christmas and The Feast of the Nativity of Mary.

You already know that the most  important asset that you have is your health. Take care of it. Seek the blessings of Velankanni - the Goddess of health and lead a healthy life. If you suffer from any ailment, you can have a dip in the holy water here and get rid of your illness just as others have! Visit here before you turn 30 as you will learn to cherish and take care of your health after visiting here. You will be filled with gratitude as to how the Goddess has blessed you with good health. Velankanni also cures her devotees of various diseases.

There are many more very famous pilgrimage centres and shrines in India. These include the Sun Temple (Surya Mandir) in Konark, Somnath Jyotirlinga in Gujarat, Ranakpur Temple in Rajasthan, Hemkund Sahib in Punjab etc. Basilica of Bom Jesus Church in Goa is a USESCO World Heritage site in Old Goa. It is the first minor Basilica and a one of the oldest Churches in India.

Some of these shrines are located on hill tops and you have to climb hundreds of steps before you reach the shrine. Some of these are accessible only after you stand in a long queue patiently. Take a trip to these places while you are young and know them well so that your  next trip soon afterwards with your whole family or much later when you are old seem effortless!