Durga or Shakti is the mother of the universe. Therefore she is referred to as 'maa' by her devotees. Maa Durga was created when demon king Mahisasura was causing havoc on heaven and on the Earth.
When the Gods approached the Trinity - Brahma, Vishu and Mahesh for their help, the Trinity or Tridev combined their powers and created Durga - the powerful female goddess.
Maa Durga killed Mahisasura by stabbing him on the ninth day of her fight with her trident. This is also the reason why she is known as Mahisasura-mardini - one who annihilated the demon.

Every year Durga puja is celebrated with great enthusiasm and devotion. The festival also marks the triumph of good over evil. 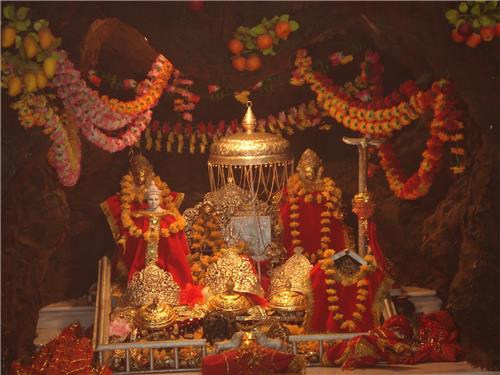 It is believed that you cannot make a plan to visit this temple. Instead, you will be able to visit the temple only when Goddess Durga wishes you to.  Devotees chant 'Jaikara Sheran wali da' and 'Bol Sache Darbar Ki Jai' during their journey to Durga temples.
Most of these temples are located on hilltops and it is an arduous journey to visit the temple. however, it is faith that makes devotees overcome all hurdles and difficulties and enjoy the satisfaction of having visited the Durga temple. Some of the mare as follows: 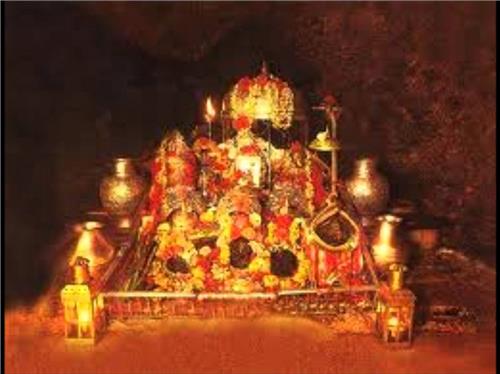 Vaishno devi shrine is situated inside the cave which comprises of idols of Goddess Kali, Goddess Saraswati and Goddess Lakshmi.  According to a legend, Vaishno devi who was a devotee of Lord Vishnu, ran inside the cave on being chased by tantric Bhairon Nath.
Here, she assumed the form of Goddess Kali and cut of the head of Bhairon Nath. The place where the tantric's head fell off is the spot where Bhairon temple or Bhairon Mandir is located. Read More

Naina Devi temple is situated in Bilaspur district of Himachal Pradesh. Naina devi is a form of Maa Shakti and is also one of the fifty one Shaktipeeths. The temple has been built at the spot where mata Sati's eyes fell. Read More 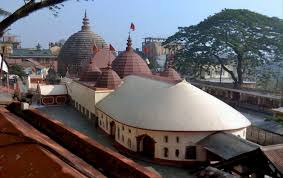 The Kamakhya temple is situated on Nilachal hills in Guwahati, Assam. The temple is dedicated to Kamakhya devi who is believed to be another form of Maa Durga.
A famous festival celebrated in this temple during monsoon season is the Ambubachi Mela. Navratri is also the time when devotees visit the temple in large numbers. It is believed that a devotee visits this temple thrice during his lifetime. 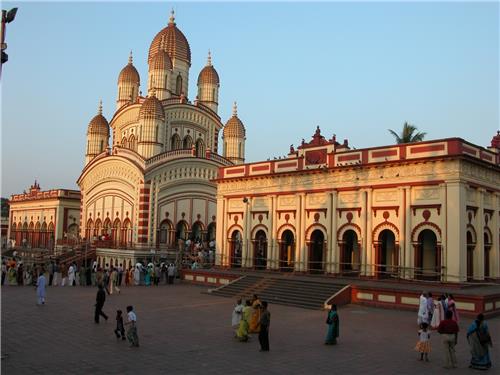 This is a temple situated in Kolkata, West Bengal. It is located on the banks of river Hoogly in Dakshineswar Kali Temple in Kolkata.
It is dedicated to Maa Bhavatarini, one of the forms of Goddess Kali, another name of Maa Durga. Both during Durga puja and Kali puja (Diwali) that devotees offer prayers. Read More 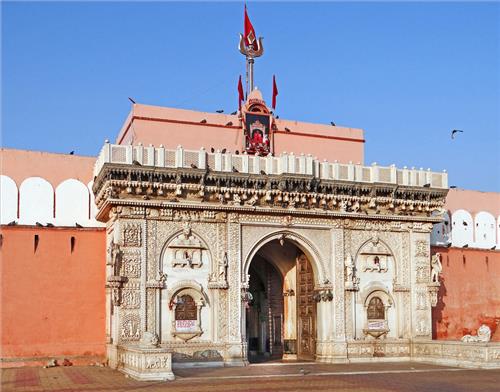 The famous 600 years old Karni Mata Temple is situated in Deshnoke, Rajasthan. Karni Mata is also believed to be an incarnation of Durga maa.
This temple is also popular for its holy rats which are protected by priests and devotees! Another temple in Rajasthan dedicated to the Goddess Durga is Adhar Devi Temple. Read More 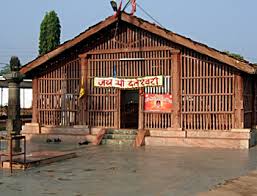 This temple is located in Dantewada town, in Jagdalpur, Chhattisgarh. Danteshwari Devi is also a form of Maa Durga. The temple is one of the 51 Shakti Peethas of Durga.
The temple has been built on the place where the tooth of Sati fell. During Dussehra festival, every year, the idol of Danteshwari Devi is taken out of the temple premises and thousands of devotees offer prayers to Goddess Danteshwari.

Actually, Dantewada town has been named after Goddess Danteshwari who  was the presiding deity of the earlier Kakatiya rulers. She is the Kuldevi (family goddess) of Bastar state.
Devotees gather in the temple for prayers during Dussehra every year and the idol is also taken out of the temple followed by huge procession. This is known as 'Bastar Dussehra festival'. During navrathras, Jyoti Kalash is also lighted.

The temple is situated at the confluence of Shankini river and Dhankini river which have diverse colours! Danteshwari Temple is a 600 years old temple.
The idol of Danteshwari mata is carved out of black stone. The temple was built in the 14th Century by the Chalukya kings in South Indian style of architecture. Garudha pillar stands at the entrance of the temple.

According to a legend, when Sati committed self immolation in yagna kund due to insult of Shiva by her father Daksha, Lord Shiva destroyed the yaga.
He lifted Sati's body and started doing 'tandav' which could result in holocaust. So, Lord Vishnu cut Sati's body into pieces to free Shiva of his grief. Parts of Sati's body fell at 52 places which were consecrated as the Shakti Pithas. Read More 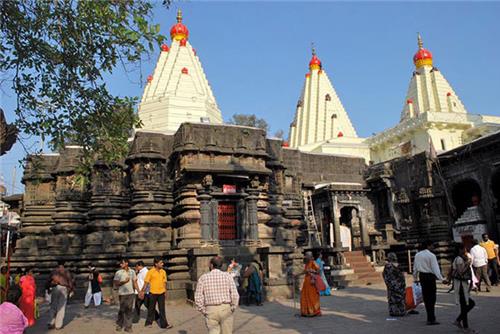 Mahalaxmi temple too is one of the 51 Shakti Peethas and is situated in Kolhapur city in Maharashtra. The idol is created of black stone and is 3 feet in height and weighs 40 kgs.
One of the most famous festivals celebrated here is 'Kirnotsav festival' which marks the touching of the feet of the temple deity by the sun during sun set on 31st January and 9th November. 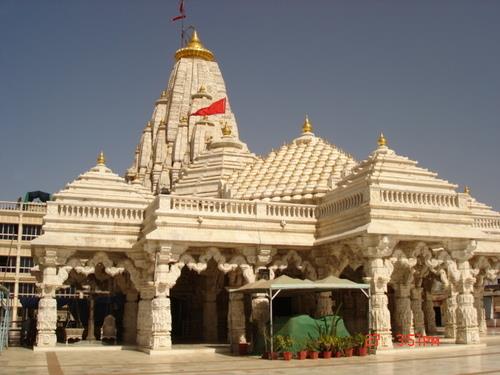 Ambaji temple is located in Banaskantha district of Gujarat. Mount Abu is nearby and devotees also make a trip to Mount Abu after having 'darshan' in the temple. The temple is one of the 51 Shakti Peethas and is dedicated to Goddess Amba mata. Read More

The Sirsangi Kalika temple is situated in Belgaum district in Karnataka. The temple is dedicated to Goddess Kali. It is situated 20 kms. from Saundatti. During Ugadi festival, the Palanquin festival is also held here at the Bannimantapa. On Amavasya too, cultural programmes are organized here.
Earlier this place was known as Pirising which gradually changed to Hirisongi and much later to Sirsangi. According to a legend, saint Vrushya Shrunga was doing penance in the forest here when demons disturbed his meditation.
As a result, Goddess Chikkumbasura and Hirekumbasura killed these demons and later settled down here where the temple has been built in Sirsangi.
Devotees put jaggery, wheat, coconuts, rice and edible oil which are equivalent to their own weight in Tulaa Bhara Seva. The famous "Butti" ritual is also performed in the temple. Halegodi Amavasya and Vishwakarma Mahotsava are also celebrated every year. 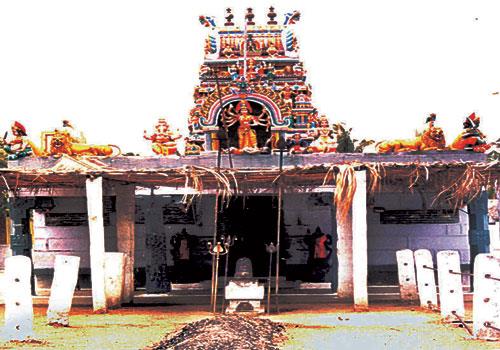 Other Famous Durga Temples in India

It symbolizes that good always partakes evil and evil is ultimately punished. So, have faith and do visit these shrines during your vacations and during Navratri festival!
8354