East India is cornucopia of culture. It is one of the few regions of India where one can explore the snow-clad mountains on one hand and sandy beaches on the other. East India is a canvas sprinkled with several colours, one can soak in the sun and sand of the beaches of Digha in West Bengal and Puri in Odisha, seek divine blessings in Belur Math and Dakshineshwar in Howrah or visit one of the oldest cathedrals in Kolkata or look for peace in Bodhgaya where Prince Siddharth attained enlightenment under a Bodhi tree. 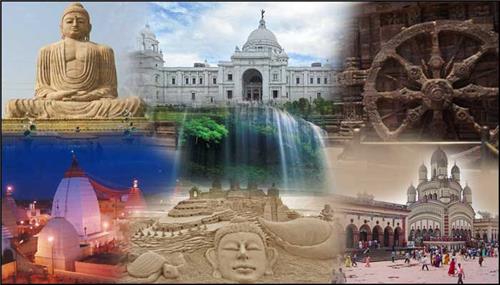 Plan a relishing tour to West Bengal which is festooned by nature's splendor and is decked with cascading waterfalls, hilly terrain, and sea beaches. The land offers you an opportunity to admire the eclectic combination of culture, nature, history, arts, and entertainment. Kolkata the capital of the state and known as "The City of Joy" is itself dotted with many monuments and give glimpses of British Raj in India. A trip to West Bengal will remain incomplete without visiting Victoria Memorial, Belur Math, Dakshineswar Kali temple, Kalighat Kali temple, Darjeeling Himalayan Railway, Sundarban, Jaldapara, Shantiniketan, Darjeeling, Kalimpong, and Kurseong. Digha Beach and Mandarmani Beach are best places to unwind and delight for sea lovers!

Odisha near West Bengal is another enchanting tourist destination of eastern India. Teeming with opportunities it is famous for its beautiful beaches, pilgrimage destinations, lakes, lagoons and wildlife sanctuaries. On your trip to Odisha, you can visit Puri, Konark, and Bhubaneswar. While Puri is famous for its great Jagannath temple, in Konark you can find the Sun Temple - a UNESCO world heritage site. Chilika Lake, a brackish water lagoon is a paradise for those interested in birding, fishing, and boating. Simlipal National Park, Hirakud Dam, Talasari beach, Chandipur-on-sea, Cuttack are other places to visit in Odisha.

Renowned for its cultural heritage and history, the state of Bihar boasts of archaeological sites like Nalanda, Barabar Caves, Kumhrar, Vikramashila etc. Richness in art and culture is amply reflected in the popular Madhubani painting which is practiced in the Mithila region of Bihar. The land of Lord Buddha and Lord Mahavira is a great cultural hotspot. Mahabodhi Temple in Bihar is a UNESCO World Heritage Site. Takht Shri Harmandir Saheb, one of the Five Takhts of the Sikhism is located in Patna, Bihar. It is the birthplace of Guru Gobind Singh, the tenth Guru of the Sikhs. Pawapuri, Maner Sharif, Thawe mandir are other important pilgrimage sites in Bihar. This part of eastern India is blessed with innumerable natural attractions. The diversified natural beauty in the form of national parks and wildlife sanctuaries is simply spell-bounding. Valmiki National Park, Bhimbandh Wildlife Sanctuary, Vikramshila Gangetic Dolphin Sanctuary, Kakolat Waterfall, Telhar Waterfall gives you the opportunity to explore the natural beauty of Bihar. Such great attractions add to Bihar tourism making it an important part of the itinerary of a traveler out on a trip of eastern India.

There are numerous places in North India that are worth visiting and one among them is the state of Jharkhand which means land of Jungles. The state is part of Chotanagpur plateau. This part of eastern India is has a rich variety of flora and fauna with scenic beauties, grasses, and bamboos forest. Ranchi is the capital of Jharkhand while Jamshedpur is a hub of economic activities. Bokaro, Dhanbad, Palamu, Giridih, Deoghar are other major cities of Jharkhand.  Rock Garden, Maithan Dam, Hudru Falls, Parasnath Hills, Tagore Hill, Baba Baidyanath Temple, Jubilee Park, Dalma Wildlife Sanctuary, Palamau Tiger Reserve are some of the prime attractions of Jharkhand.