Soil is a thin layer of material on the surface of the Earth in which plants are rooted. Soil is made up of many things, such as weathered rock particles and decayed plant and animal matter. Soil is formed by many chemical and physical changes over thousands of years. 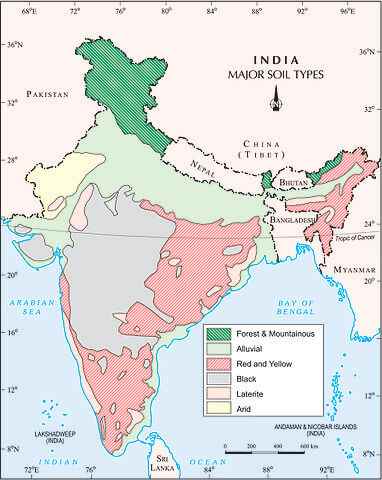 The formation of soil is a long process that is continued over thousands of year. The weathering of rocks and minerals initiates the formation of soil.
The rocks on the surface breaks down into smaller pieces through the process of weathering and is then mixed with moss and organic matter and over time this forms a thin layer of soil.
Plants attract animals, and when the animals die, their bodies decay. Decaying matter makes the soil thick and rich.

Soil is used in agriculture, where it serves as the primary nutrient base for the plants. Soil is used in surface mining, road building, and dam construction. Soil provides minerals and water to plants.
Being porous in nature soil accumulates rainwater and releases it later. Soil filters and thus purifies the ground water. Soil provides home to many organisms like earthworms etc. Organic soil, peat, provides fuel. 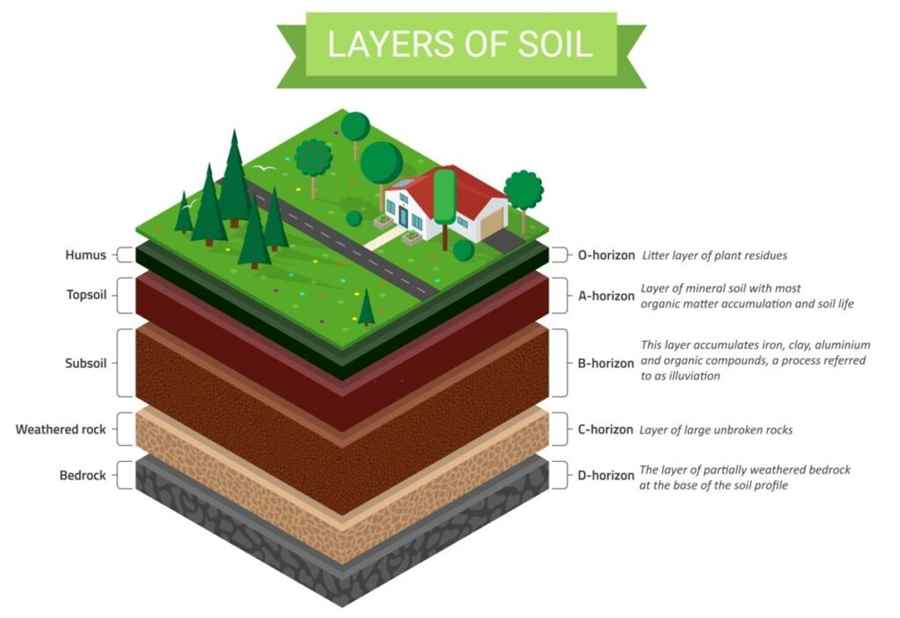 There are eight layers of soil called as Horizon O, P, A, B, E, C, D and R. It is not necessary that all the layers are present everywhere.

This layer contains organic content known as humus. Humus is decomposed organic litter, like fallen leaves and twigs which in turn helps in preventing erosion and holds moisture. The ‘O’ Horizon is distinct from soil itself because it contains the layer of leaf litter and no weathered mineral particles.

These horizons are also rich in organic content. This layer is formed under waterlogged conditions. The “P” designation comes from their common name, peats.

Horizon A is the uppermost layer of soil rich in humus and is nearest to the surface. It is commonly known as topsoil. ‘A’ Horizons may be darker or lighter in color depending upon the quantity of humus and clay present in them. This is zone where most of the biological activities occur.
Soil organisms such as earthworms, potworms, arthropods, nematodes, fungi, bacteria and archaebacteria finds their home in it. That’s why ‘A’ horizon may also be referred as the "biomantle". This layer provides nourishment to the plants.

Horizon B is the layer that lies below the horizon A and is commonly referred to as ‘subsoil’. Litter is not present in horizon B and the quantity of humus is very less but is rich in minerals. Due to the process where nutrients dissolves and is carried away by rain water (leaching) Horizon B is brownish or red in color and contain only some elements from horizon A.

“E” in the name is short for eluviated. The horizon is pale in color due to leaching of its mineral and/or organic content, and is largely composed of silicates. These are present only in older, well-developed soils, and generally occur between the A and B Horizons.

D horizons are not universally distinguished.

Horizon C is the layer of soil next to horizon B. Leaching also carries some minerals from horizon B down to horizon C. Horizon C consists mostly of weatherized big rocks.
8916