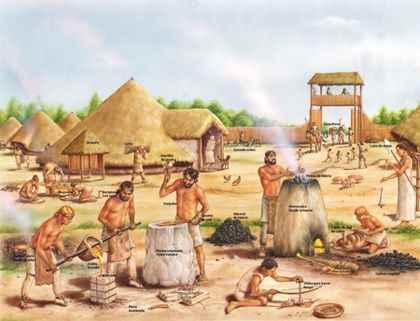 The life of the primitive people got more established because of agriculture, people began to live a settled life at a single place for a life time to do farming and producing food leading to the emergence of towns and villages.
Stone tools and weapons were also further modified and sharpen by fine shedding of the stones, as the sharpness was comparable to the present day blades.

Another important feature of the Neolithic Era was the onset of domestication of animals like horses, cows and so on. Domestication of the animals broadened the eatables category of the primitive people as then people started including dairy products and meat items in their diet.

Neolithic Era also contributed greatly in the field of transportation by an important invention of the wheel. This era was further followed by the copper, bronze and iron ages in the ancient history.
Neolithic traces in India can be found in various places like Belan Valley in Uttar Pradesh, excavated sites in Hallur, Kodekal and Brahmagiri in Karnataka, and Utnur in Andhra Pradesh. Stone tolls were more polished than the Mesolithic period and cultivation of different crops like wheat, barley and millet started.
Grass huts paved the way for mud brick house and pottery was extensively used during the Neolithic period. Historians also suggested the use of cotton and wool by the Neolithic people.

Towards the end of Neolithic age, bronze and copper came to be used which also started the Bronze Age in India. It is also known as the Chalcolithic period because of heavy use of metals like copper.
However, stone tools were very much in vogue and at an advanced level. The Chalcolithic period is followed by the Iron Age which increased the use of iron artefacts and red and black pottery. The Harappan civilisation or Indus Valley Civilisation succeeded the Neolithic age.
6324